A Brief History of our Backyard

What better way to start talking about my interest in gardens than to give a brief tour of what's happened in my own yard over the last few years. Our lot has roughly four areas that can be planted; today I'll just talk about the backyard.

In the backyard we inherited a large deck with plexiglass wind screens and 8 person hot tub surrounded by tree size oleander's, a large cypress, multitudes of Japanese iris and a moldering wood pile among other treasures. Of course the hot tub required a number of pumps, gas heater, filter etc all of which took up a considerable amount of space both above and below ground. In short what we inherited was a small, overgrown yard chopped up into even smaller spaces that just didn't work for our family of six.

These things are gone now after a few years of weekend demolition projects (and several negotiations with family members). I managed to dig up a few progress shots I took with my old phone (which unfortunately had a scratched lens). Apologies for the poor quality but it's fun to look back at how much the space has changed. I wish I had some even older shots of what the space looked like originally; the view used to be completely blocked and the windscreens lent it an almost rat maze quality.


With children and a dog what we really needed was a open, usable, space to play. I eventually decided to remove more of the aggregate patio (underneath the sledge hammer above).

As we discovered the backyard's micro-climates I tried using Aloes in the hotter corners. Little did I know the Aloe plicatilis above would outgrow it's pot so quickly. We are on a ridge with full sun for most of the day and in zone 10a; once in the ground - most succulents seem to get along pretty well with the yard.

The deck looks like a nice addition to the yard in the shot below; that's partly because we'd just refinished it and the massive brown hot tub cover is pushed off to the side. The reality is it had a large footprint, created awkward, unusable spaces along the sides and remained unused for most of the year. It had to go. This was easily the biggest point of contention among the family.

Fast forward a few years from the shot below and even the Monterey pines shown in the background have been removed after succumbing to drought. 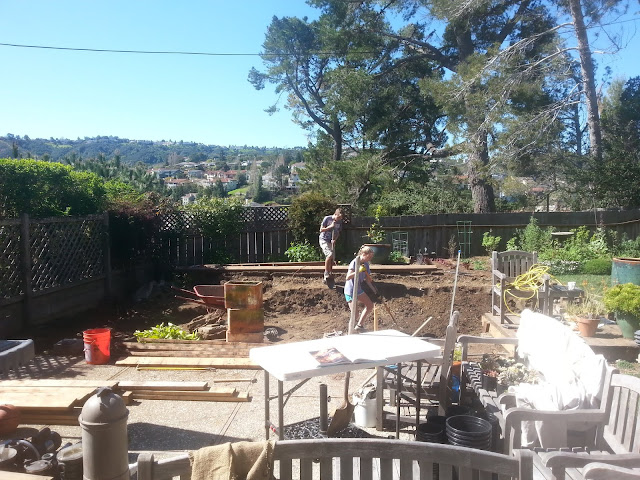 My children helping to establish a rough grade.


A fair amount of the deck was suffering from termite damage. This particular piece had direct contact with the ground and so made a nice meal for a colony of sub-subterranean termites. If you look closely they are visible as white blobs. As a side note I've seen wood show signs of termite damage within two years once it's in direct contact with the ground. Any one living here in California knows they are a common problem.


For a few years we grew a large garden of vegetables which seemed to make much more sense than growing a crop of grass - e.g. enlarging the lawn. We loved the fresh tomatoes but as it turns out so did the rats and mice. It was particularly maddening to watch several, beautiful, large heirloom tomatoes growing only to find the rats had held a tasting session the previous evening. Invariably half the tomatoes were not to their liking but of course still ruined. This growing season alone I caught a combination of eight rats and mice.

Let's jump to today and take a look at how I used our ever growing collection of plants (you'll notice in the background I still have lots of black plastic pots). I made a conscious effort to balance the 'collector' in me with the designer. In some places (not shown) I did take a 'one of everything' approach because I just want to see how they grow up!

In the summer, over a cup of coffee, the above bench is one of my favorite spots to sit in the early morning. At 7am on any day in July it's guaranteed to be absolutely quiet.


As you can see from some of the empty spots we still have a few areas to plant but that's the fun part and there's no need to rush.
Labels: backyard demolition hot tub lawn new soil potting table stump termites