At roughly 40' x 45' our backyard is relatively small and can be viewed in a single glance. As a result we wanted to create a sense of mystery by obscuring views through elevation changes or strategically placed plants. Along the left side of a gravel path that branches off the patio is another new planting bed that I'll focus on today. 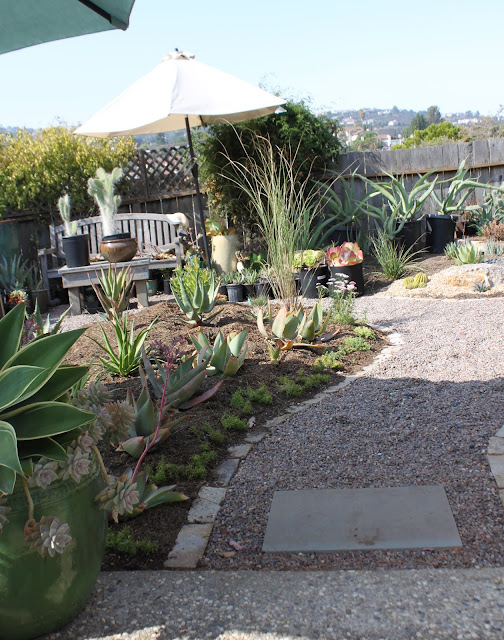 The front of the bed has a curvilinear edge which disappears with the path around a bend toward a 'hidden' bench. I'm using quotes here because the plants have not grown enough to hide anything yet but someday hopefully that will change :) I used several Aloe striata (Coral Aloe) along the edge of the bed for a bit of repetition, for their minty green / pink hues and because I have about 20! The Coral Aloe are also meant to lead the eye to a splash of colorful yarrow and make you wonder "hmm... what's around that corner?".


Next to one another sit two Agave bracteosa both of which have a beautiful arching vase form with long, squid-like arms. I have to admit that the 'Mateo' pictured above is my favorite. The subtle light green variegation and slightly thicker leaves make for less arid look. This is another plant that spent the first 18 months in my backyard living in a 5 gal pot.

This Aloe ferox is one of the specimens I'm hoping will eventually grow to obscure the backside of the planting bed. I bought a few of these Aloes a year ago from M&J Nursery in Fallbrook - they are one of my favorites in the Fallbrook area. I think the above has doubled in size since I originally purchased it as a 1 gal plant.

Hidden along the backside of this planting mound is a Agave funkiana 'Fatal Attraction' which I picked up about 18 months ago in an 8" pot. It produced a few offsets which are doing nicely in their own pots - although I don't have a home for them just yet in my yard.

In the background of the funkiana shot above you can see this somewhat sad looking Agave kissho kan which I purchased mail order from Cactus King in Texas. Why did I do that when it's commonly available close to home? I don't know - I suppose I wanted to just try out Cactus King which I've come to find out has a bad reputation. My experience was meh. The plants seemed expensive, poorly packaged and there was one substitution. Anyway - now that this little agave is in the ground I'm betting it will finally begin to grow.

On the backside of this planting is an Agave 'Cornelius' which I'm really looking forward to seeing mature into a miniature agave. This was another Cactus King purchase and one of the better plants they sent in the same mail order as the kissho kan above.

Further along the far side of this planting bed,  neighboring the above Agave 'Cornelius', is an Agave ovatifolia purchased recently from a trip to Annies.

Is this a face only a mother can love? I was told that this Agave xylonacantha was not attractive by persons in my household who shall remain nameless. But I think it definitely has it's own charm. Do you see the blue spiky plant in the background? That is an Agave macroacantha - which has just about the nastiest spikes of all the spiky plants. Both these specimens were shipped dry root from another of my favorite nurseries - Serra Gardens. I'll do a future post showing how well the plants were wrapped and labeled.

At the top center of this mound is another Aloe Hercules an Aloidendron dichotomum which with the grass behind will help screen the 'hidden' seating bench.

This Alluadia procera is another specimen I've had for over a year and brought inside a few times when temps are at their coldest in February. In theory it should do ok here on the Mid SF Peninsula in our 10a plant zone. I suppose we will find out if this guy can really handle 35°F; according to Serra Gardens, where I purchased this plant, it can handle temps as low as 25 to 30°F. At any rate it's an unusual plant for this area and I'm very happy to have one growing outside my back door.

Finally here's one more shot of something in my garden just because ...

This Opuntia erinacea seems endemic to the area; I have some growing in my yard. Like other Opuntia it is easy to propagate and it's very, very tough. It seems that the less water it has access to, the thicker the mane of spines grow; I suppose they act as a built in shade cloth. I'm actually just guessing at it's provenance - hopefully someone out there can confirm or provide more info?
Labels: Agave brateosa Agave Cornelius Agave funkiana Agave Kissho Kan Agave macroacantha Agave ovatifolia Agave xylonacantha Alluadia procera Aloe ferox Aloe Hercules Coral Aloe M&J nursery Opuntia erinacea