Nicely composed landscapes and garden vignettes remind me of interesting city skylines. I'm sure you can picture some of the world's most famous city skylines right now if you tried - San Francisco, Sydney, Hong Kong, New York ... These skylines are compelling in a way that a suburban strip-mall is not. But why?
Above shot of San Francisco by Florent Lamoureux is licensed under CC BY-NC-ND 2.0
A recent post by Danger Garden showing a sepia post card got me thinking about how to zero in on form in our backyard gardens. Let's try removing some of the color "noise".

With the colors gone the plant shapes and the over all 'garden skyline' become a bit more visible.
Next lets convert the image to a sketch which will drop out much of the detail but still contains some reference to texture.
Now that items in the background have been omitted, the garden skyline is emerging clearly!
One thing that popped out to me while sketching the above - the textures of this garden are almost exclusively coarse. Agave and Aloes have such a strong, rigid form. I 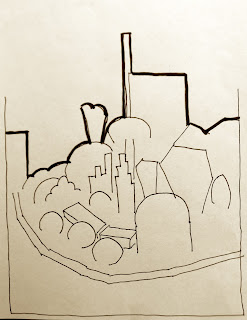 think this part of the garden could benefit from some softer textured plants like a tall grass, Leucodendron, sage or a native CA plant.
Next lets reduce each plant within the garden to a basic shape: globes, mounds, vase, towering rectangles, domes, blocks, mats etc.
Remove any hint of plant texture and our garden-scape is starting to resemble a city-scape! Aloe "Hercules" has turned into a skyscraper, the stone border is now a promenade and the gravel path a body of water.
If you squint, the SF skyline below has a very organic feel. The tangle of buildings and their right angles appear like a naturally occurring blanket of vegetation punctuated by a few taller buildings - some with interesting shapes like the Transamerica Pyramid. This picture lacks some of the bigger more dramatic structures of other skylines but it's still pleasing. It feels harmonious somehow.

San Francisco Shimmer by Don McCullough licensed under CC BY-NC 2.0
Shopping malls on the other hand lack that certain something that draws tourists from around the world. This shot feels... flat and without spirit ( though no fault of the photographer - it's just the subject matter)

Stripmall by Keith Peters licensed under CC BY-NC 2.0
What's different between the two pictures and why does it even matter to someone like me puttering in his garden? I can't help but feel there is some lesson to be drawn from the difference between these panoramic shots.
The mall shot could be almost anywhere. There is no sense of place unlike the SF shot which is somewhat uniquely placed on a hill behind a body of water. The San Francisco skyline is iconic so it's a bit unfair to compare these two images but at the same time great city skylines are iconic because they are unique! A mall image is not iconic because it is not unique. I'm not saying every garden should be iconic but it helps if a garden has some "spirit of place". As an aside and if you'd like to dig deeper into the implications of the "forces of nowhere" here's an essay entitled "The Architecture of Social Isolation" with some interesting thoughts on our modern society.
The skyline photo above of SF feels harmonious partly because of a rough symmetry. The silhouette builds to a center high point and falls away on either side - not precisely but in an asymmetric, organic fashion you might expect from a place that's been built, burned down, and rebuilt over many decades. If you have ever worked in, lived in or visited a city like San Francisco then you've seen the continual construction that takes place. Like a forest it is a place of constant renewal. I don't mean to pick on malls but they are static things - they grow all at once and then seldom, if ever, change until they are torn down and replaced.
I'm starting to wander now... but what happens when gardens and city skylines are combined?
Highline by Helen K licensed under CC BY-NC-ND 2.0
I'd love to see the Highline Gardens of New York some day. They deftly borrow offsite views of the city skyline so that a 'flat' garden still has a visual pop. Imagine this same planting surrounded by a suburban style wooden fence; it wouldn't be nearly as interesting.
Back in SF a new elevated transit corridor was recently completed after many years of planning and construction (for awhile I worked next door to part of the construction). It was a massive project.
Photo by Timothy Vollmer licensed under CC BY 2.0
Up top a few trees can be seen peaking over the edge.
photo by torbakhopper licensed under CC BY-ND 2.0
Garden and city skylines expertly woven together. For some reason this feels like we are on the road to OZ where adventure awaits!
Aloe by Dianne Yee licensed under CC BY-NC-ND 2.0
After this long ramble I'm not sure what to take way other than I'll be paying more attention to the outline of my garden endeavors going forward. On a smaller scale it should be possible to capture some of what an engaging city skyline has to offer.
Happy Gardening!
Labels: Aloe Hercules design pedantic