The January weather this year was accommodating enough that an early re-start on the hillside garden proved too tempting to turn down.

The front garden has a roughly "S" shaped path that meanders down the hillside. The dirt path in the bottom left is on top of "fill" from the "cut" to the right.

After the palettes of material arrive there's always a fun discovery phase where I see what exactly I have to work with this time around.

With no rain for some time the ground is already turning color. Normally this is our rainy season and while I appreciate the beautiful weather this means the ground may dry out earlier this year. 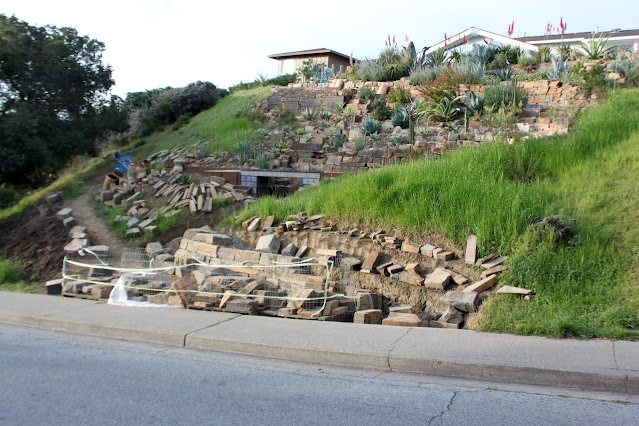 Most of the rock at this point is fairly well spread out across the hillside to help with the process of picking and choosing just the right piece. 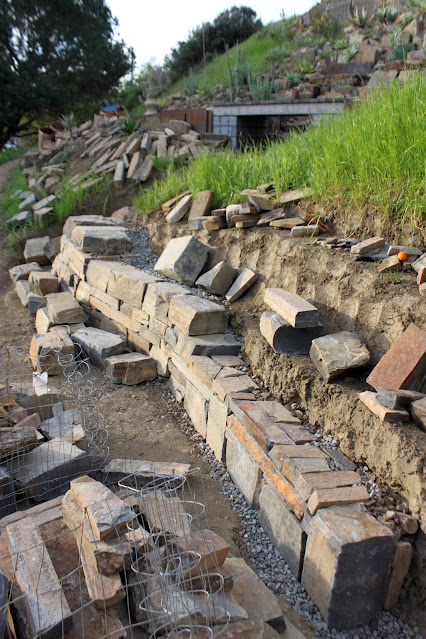 I've been using some ledge stone for a tighter, more finished look in this area of the garden. This will eventually act as informal seating wall at the back of a garden forecourt.

By mid March the wall has been completed. 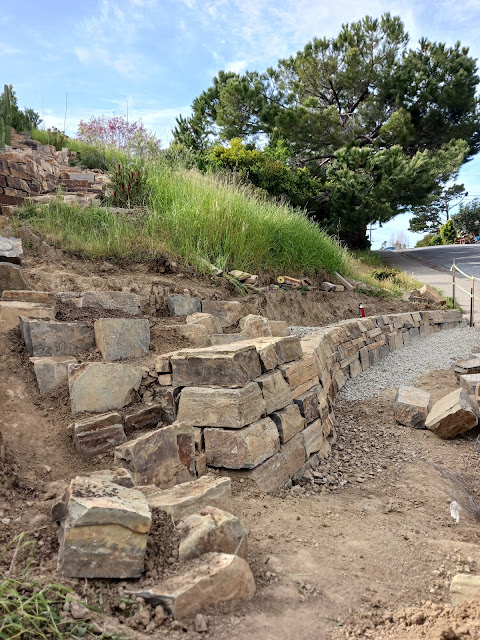 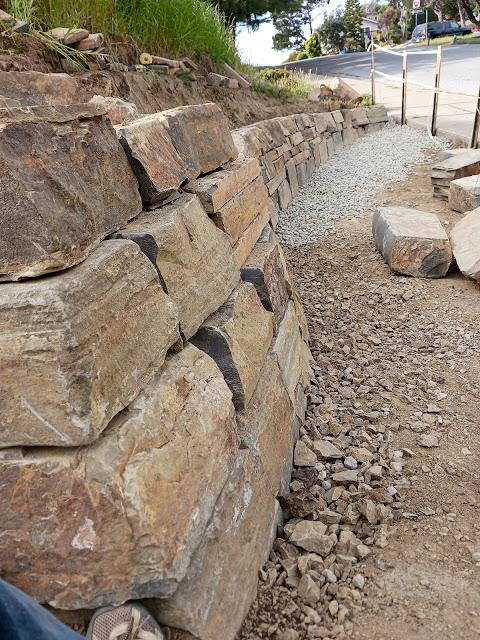 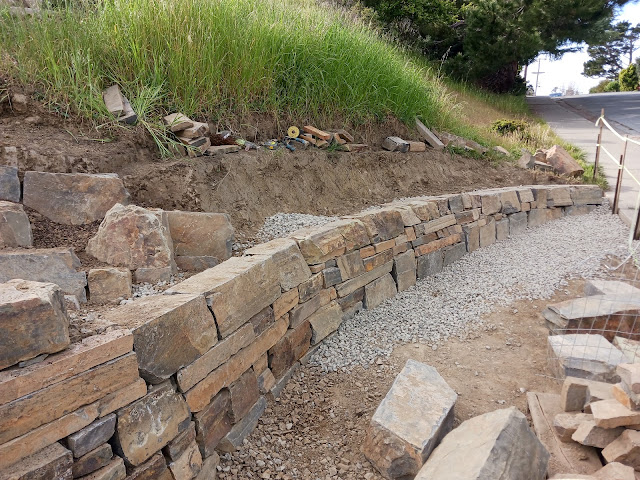 The area between the wall and the sidewalk will be covered with a layer of crushed drain rock which will act as the subsurface for the forecourt. 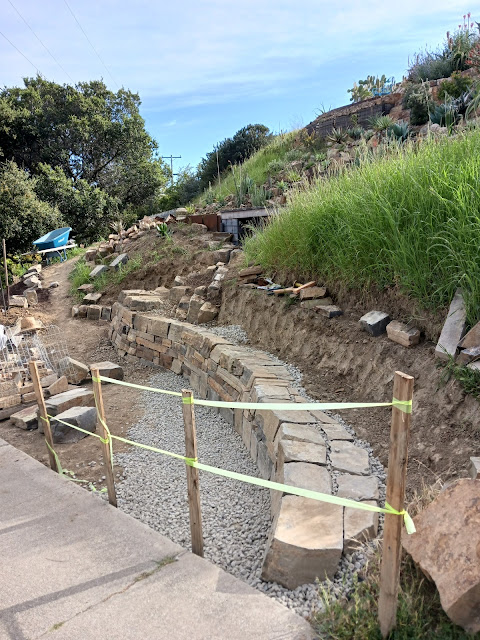 These stakes will be replaced with a low fence and gate at some point.

Unfortunately I don't have the best rock for a crevice garden; it feels too blocky. I'm hoping that once I layer in place smaller rocks, gravel and plants that the final look will improve.

By early April both edges of the dry creek are in place. Just like putting together a jigsaw puzzle, the middle remains to be filled. 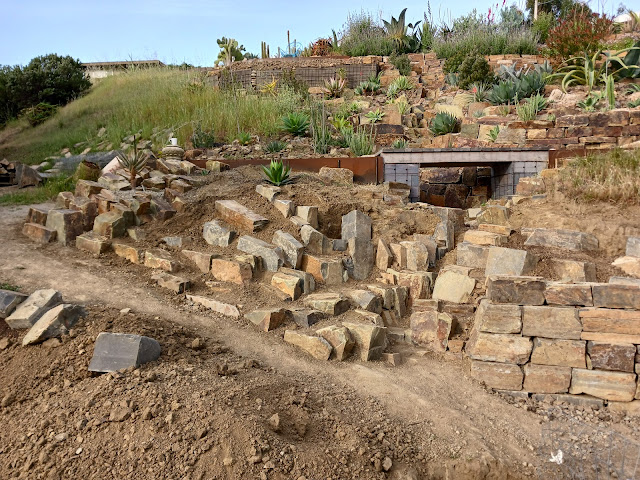 This part of the hillside will form a rocky outcrop intersected by the seating wall. The goal is to make the outcrop feel as though it's a naturally occurring formation which was cut away in order to make room for the wall and patio.

It's tempting to jump strait to the 'sexy' part of a garden which in my opinion would be the plants. Successful gardens are planned and built in layers and this can take patience. For example the mountain of rocks above are a dominant feature now but will recede into the background over the coming years as plants grow. It's worth spending a lot of time on this 'rocky' phase of the build because the boulders and how they are arranged are adding: structure, visual interest and habitat.
After another burst of activity much of the smaller rock has been interspersed throughout the crevice garden. It's difficult to see but there are roughly a dozen planting pockets nestled in the crevice garden. 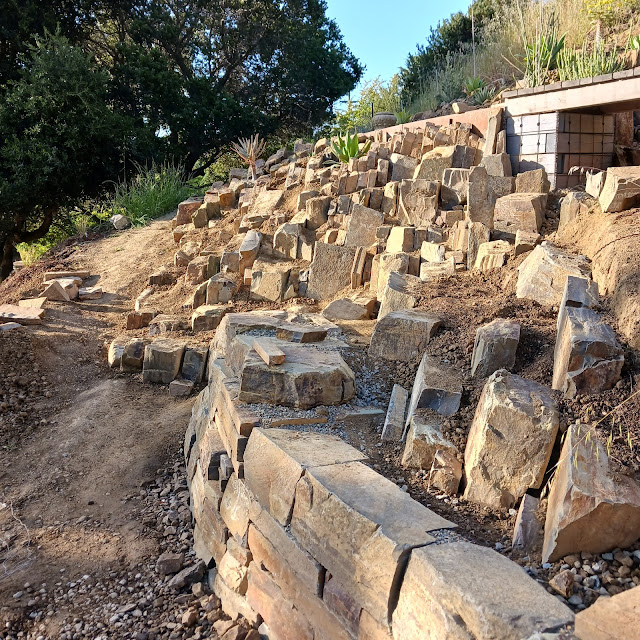 The garden's structure introduces obstacles that encourage visitors to walk a path of least resistance and experience the space at a slower pace. The boulders also perform a practical task - retaining the hillside and preventing future erosion. All the cut and fill work and addition of these rocks has changed the flat plane of the hillside into a roughly curvilinear mass punctuated at points with "bump outs" and alcoves. Hopefully this introduces a sense of discovery.

The smaller, irregularly shaped ledgestone make great infill among the boulders. When these smaller pieces are combined they form an outline which hints a larger mass of rock just below the surface.
The small spaces between rocks will offer a relatively cooler, moister habitat for roots. Space behind the rocks offer planting pockets and an opportunity for water to settle into the ground before moving downhill.

A few weeks after putting in some herbaceous plants and I'm pleasantly surprised that they have not been decimated by the deer!
The rocky mulch is a mix of native rock / decomposed granite / 1/8" - 3/8" crushed gravel mix. Hopefully the mix looks somewhat natural and does a decent job of retaining soil moisture.

Like many gardener's out there I've been a fan of Kenton Seth's  since first stumbling on his blog a few years back. I've drawn inspiration from pics I've seen of his crevice garden work and tried to create my own version (with a modified plant palette).

Kind of a happy accident that the rust colored flowers of the below Salvia rhymes with the Corten steel, oxidized rock surfaces and the rusted wire mesh of the gabion baskets.

The days are long now and the weather hotter so the plants will be put to the test these next several months. I'll continue to hand water them during their first dry season so that they stand a fighting chance.

I'm generally excited to introduce more drought tolerant grasses in the garden as well. The above Pennisetum ("Slender Veldt Grass") is native to South Africa so I'm hoping it does well in our Northern California climate.

The young Agave pedunculifera (above on left) are toothless, soft agave with flexible spines which are largely harmless. It's become one of my favorite plants on the hillside because it's tough but still has a graceful form and green color which soften the garden.

I'd planned on finishing the crevice garden and dry creek with this post but other tasks always seem to pull me in different directions. It will eventually be finished - likely bit by bit!