Aloe thraskii has proven to be one of the fastest growing Aloes in my yard. At just over a year in the ground it is already putting up magnificent, candelabra like, bloom spikes!

Who doesn't like to see the bees come out on a sunny day in January? Look closely at the shot below and you'll notice the bee carrying little, orange, saddlebags of pollen.


But let's go back in time a few years to when this same plant was living in a pot. I'd originally purchased this plant at a 5 gal size and then shortly there after upgraded to 15 gal until I could figure out where it would live permanently.

Planting it required removing some of the lower leaves. 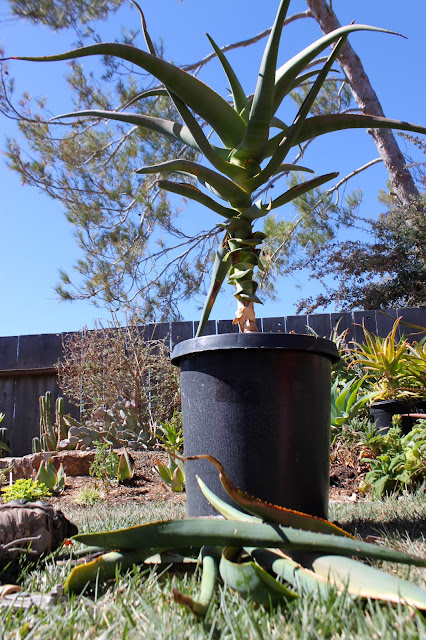 Not many months later this specimen of Aloe thraskii had responded well to being planted in the ground.


I've turned into a believer that it's worth spending the extra $$ upfront on a few larger specimens for a quicker impact in the garden. This is especially true if the garden is new and a variety of height is mostly likely to be missing.

The below shots show another A. thraskii I purchased online which admittedly was only planted in the ground over the last 6 months ... but still, it seems the fast growing mojo of the larger plant above is missing.


Like children maybe they go through spurts of growth at various stages of life? This one does remind me of a malnourished waif. Perhaps in another 5 years it will grow as big as his cousin... but having the full size version NOW is great.

Aloe thraskii can apparently grow quite big! It can reach a height anywhere from 2 - 4 meters tall if it likes the environment. Mine is probably standing about 4' tall currently and it's a bit hard to imagine it nearly doubling in size. I'm a few miles from the sea, over some small coastal ranges so we may not have the ideal growing conditions. According to the GardenAloes site:

This plant comes from sand dunes along the east coast of South Africa and is best grown in coastal areas. These plants are naturally found along the coast in a very narrow strip, never more than a few hundred metres from the sea. They are always found in groups in the coastal thicket, often as part of the ground layer or sometime in clearings and rocky places.


It has turned out to be one of my favorite plants not just because of it's dramatic appearance but it's general hardiness and low maintenance once established.
Labels: Aloe thraskii then and now