I've been working on the steps which connect the bridge with the upper garden path. They've been left as dirt footholds cut from the hillside for the last year+ which has made getting between the the two areas precarious.

Because of the fire hazard all grass is cut short during the dry season. Most of the year that means the hillsides in our neighborhood are left looking barren.

There wasn't enough horizontal room ("run") to meet the existing top landing (shown below) so I disassembled it's edge and reused the boulders as steps. 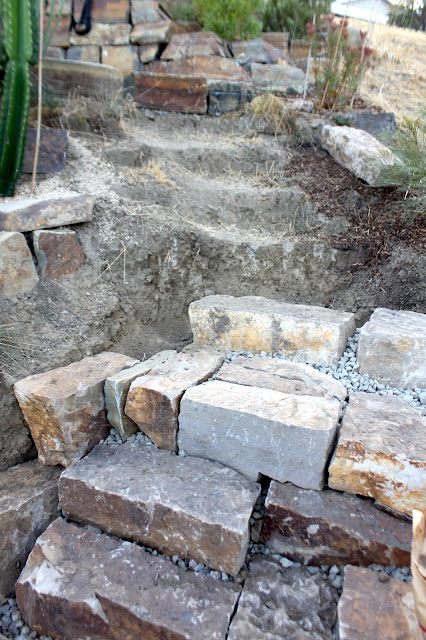 As you can see below - to make this happen required sacrificing about a foot of the landing. Oh well. 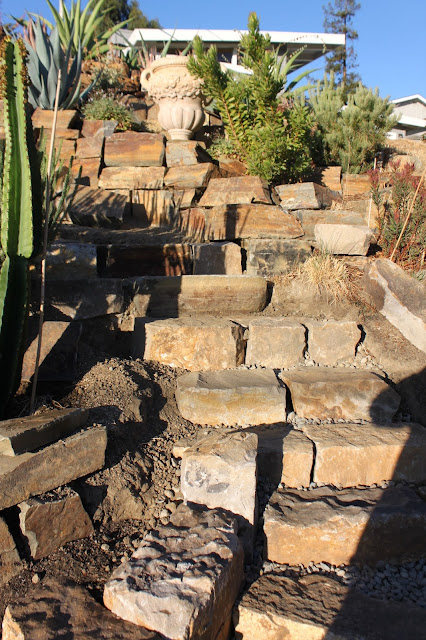 As the "rise to run" ratio steepens on the steps they become less comfortable to negotiate. I find myself slowing and looking down with each step. This makes a natural spot to add smaller, specimen plants - maybe Agave Kissho Kan, or an Agave 'Cream Spike'.

I'll add rock to hold the right edge of this path which will in turn open up new planting space. I'm hoping to create a sense of enclosure with some larger sized Leucadendron etc on the downhill side of the path. It may be hard to tell from the above picture but eventually these steps will form a ribbon of rock cutting through a green landscape.

Over the next weekend

The sun is setting after another weekend of work.

Looking at the above shot makes me wonder when does a garden turn into a landscape? I'm not sure I understand the difference but vaguely think of landscapes as a slice of nature - perhaps a bit unkempt or even unfriendly. Gardens are our creations while landscapes just exist and don't care whether we fit in or not. I've borrowed some of the later for this garden so it looks like a stylized version of a natural space. If I push it too far will it feel like a landscape with garden-ish qualities? Someone walked by a few months ago and complemented the garden but then stopped mid-sentence and wondered out loud if it even was a garden. Good question - I thought it was. 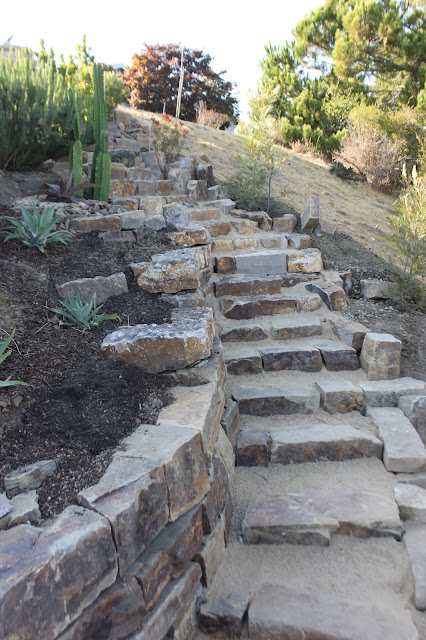 By this point the steps have been given a layer of decomposed granite aka "Gold Fines" as well as edging. The common surface gives the steps a new sense of uniformity that I like. 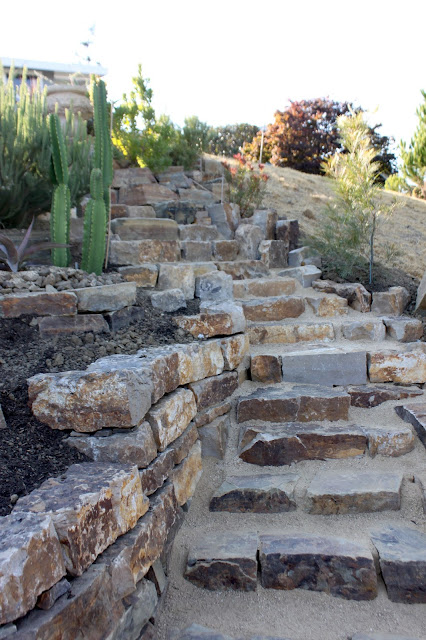 The concept of a hybrid garden / landscape and at what point one turns into another is fascinating for some reason. I don't think there's a magic point at which one turns into another - it seems more likely there's nuance involved. That's good because it gives us gardener's room to operate and find what suits us and the environment. Maybe another way to think about the difference is gardens are made by us to serve our needs and wouldn't last long without our care whereas landscapes existed before us and regardless of us - though they may still serve some of our needs. Both can be beautiful and inviting but one is controlled while the other is wild.

Maybe the hybrid garden / landscape is intriguing because it's hard to categorize. It's a little wild and dangerous but still manicured and ultimately artificial - so safe.

I just learned about the old adage -

Some landscapers / horticulturalists disagree with this sentiment which I think has mainly to do with amending the native soil. I have mixed feelings about the topic - but what is apparent on a hillside is that the "$5" can easily be spent on labor and materials to hold the plant in place! 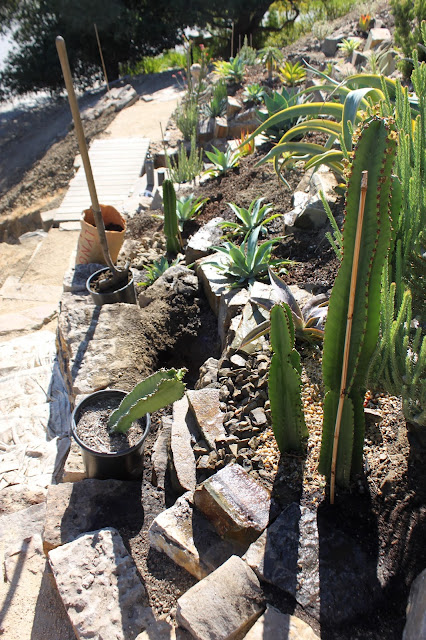 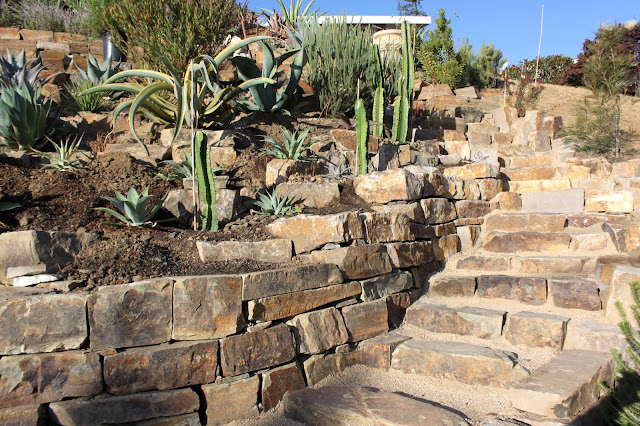 With a lot of effort I planted a total of... 5 plants. Two of them were the young Euphorbia amarak's which I thought might punctuate the hillside dramatically over the coming years.

Nestled in a rocky corner is one new Agave...

I was reading some very practical advice recently that mentioned gardens should compliment the architectural style of nearby buildings. For example a modern house might benefit from clean lines in the garden and avoid overly ornate pots or statuary. I came away feeling a little constrained until I realized this hillside garden is completely disconnected from our house - you can't even see our house while in the garden. This space can take whatever flight of fancy it wants because it stands alone. It is it's own thing.

The real rain has arrived a little early this year with a classic pineapple express hitting Northern CA. This is great news for our corner of the west because we certainly need the moisture. It's not great news for my efforts to put some finishing touches along the step's edges. 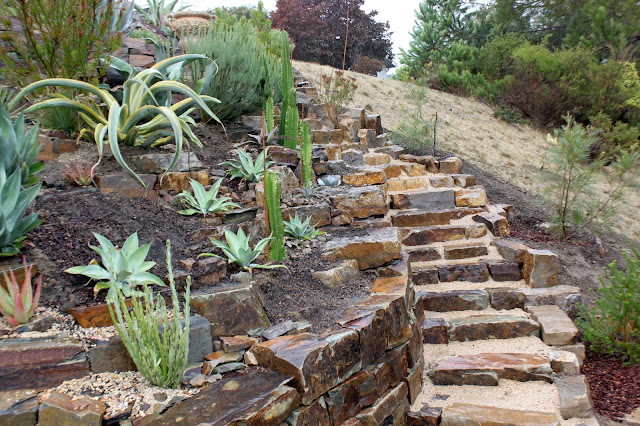 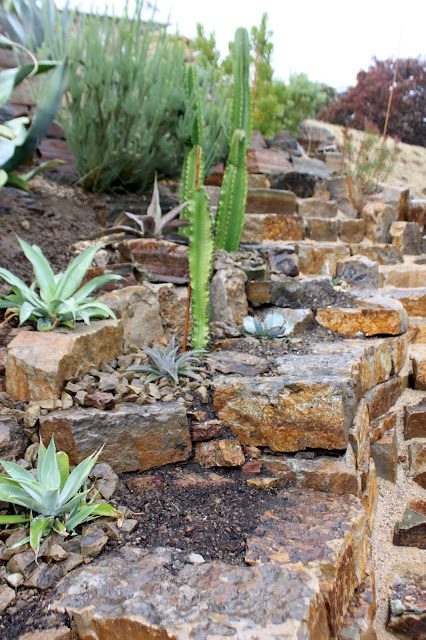 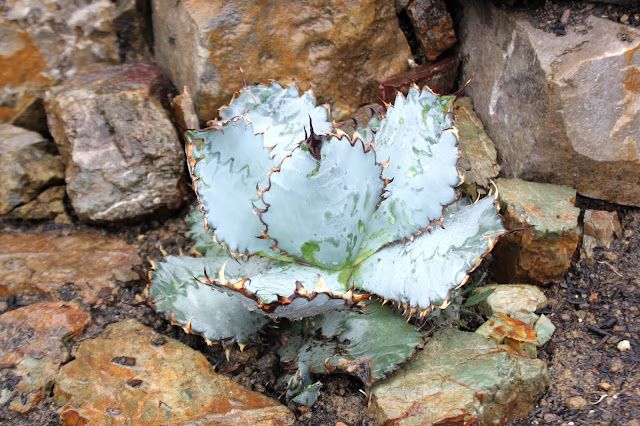 It's hard to tell from a distance but I added about 50+ lbs of smaller rocks around the plants late yesterday. When I'm lucky the rocks and plants have complementary hues.

There is more work to do in this area around the steps but I'll save that for another post. With the dramatic turn in our weather this seems like a good stopping point.