DIY Gabion baskets in the garden

Hillside gardening seems to involve a lot of prep work before plants can go in the ground. A large part of the work is figuring out different techniques to retain the slope in ways both large and small. One technique involves using gabion baskets which are basically a wire frame filled with rubble that can be used to retain a hillside, build a wall, a bench or even to create a decorative element in the garden.

I made my baskets from left over 10 gauge welded wire mesh but there are lots of sturdier, premade options on the market that are much more handsome (and require a lot less effort to assemble)

The basket is held together with homemade wire slinkies. By 'homemade' I mean that I bought some thick gauge wire and wrapped it around a rod to create the distinctive curlicue shape. As an added benefit you'll get an awesome forearm workout.

I spent some time getting the two baskets somewhat level before filling them with rubble. Oddly enough, possibly because of the compound slope of the hillside, when the baskets were exactly level they appeared wildly out of wack when viewed from the sidewalk. To compensate I reset the baskets off level. As a good salesman once told me - "Perception is reality"

The cut I made, through what felt like solid rock, turned out not to be as stable as predicted. What I really need is another few tons of boulders to hold up the embankment and finish the dry creek.

Once things dried out I cleaned up and pulled the box forward. To keep the dirt out of the box, and even out of the rock around the box, I improvised a solution with some left over landscape fabric. Water will move through and under the fabric, into the box and out the bottom through a layer of drain rock. My hope is that without a natural build up of silt the rock rubble in the box will continue to drain freely and dry out more quickly. A general rule of retaining a hillside is not to create a dam; avoid the unnecessary pressure that will build and push over your structure. 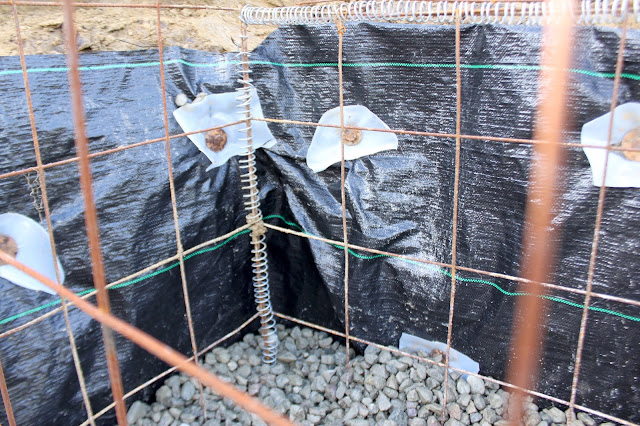 I would have chosen a more porous landscape fabric but because this was available I decided to avoid a trip to a the store. A quick test on the lawn showed that a puddle of water would still drain through in a few minutes. The spikes in the background holding the fabric up are recycled as well. The white plastic acting as large washers are from a cut up plastic milk jug!

I hear you asking "Why did I stain these a blue?"  We had some left over stain from a previous project and again I wanted to just use what was available. Hopefully the color works once all the landscaping is done ;)

There didn't seem an point in putting lumber at the back of the basket. No one would see it and the wood would stay moist and slowly rot. The giant piece of concrete is from a portion of the patio in our backyard... I've been saving it for just such an occasion.

For added strength / rigidity I may tie the lumber corners together with some large lag screws. I can always come back and do that at a later time if the blocks are shifting out of alignment.

Hmm... looking at that gap it almost seems like pedestrians will need some way to get across - it's too far to jump. Maybe I need to build a simple foot bridge ;)

The "V" shaped cut is what I made to release all the rain water. It will eventually be enlarged into a natural looking creek bed.

So there you have it - my version of a gabion basket in the landscape. There are lots of different and inexpensive ways to build them and even more ways to creatively fill them: stone, wood rounds, glass rock, old tile and even bottles. If you're gardening on a hillside and feeling adventurous, consider using a gabion basket or two.