A year has passed since we first started the current backyard garden. It's time to check in and see how much the original plants have grown and what new plants have been added.


As a reference point for how much has changed, here's a historical post - Bed Two

I've grown attached to some of the volunteer flowers that pop up throughout the seasons. The purple flowers above are Bee Balm volunteers. The only drawback is they grow too large and shade succulents from the sun. The Aloe striata suffered from sunburn after I pulled out lots of CA poppies late this spring.

These Coral Aloes have grown quite a bit in the last few months. The rock mulch shown above has helped them stay green and lush. What's also helped are the temporary sunshades erected this summer. I plan on taking them down in late October as the back garden starts to receive less light. The temporary posts are made from a deck that used to sit over this spot.

Ground cover along the edge of a mound can be tough to keep looking happy and healthy. I've started creating miniature retaining walls to prevent excessive water run-off and applying a top dressing of rock mulch. The darker plant is Sedum kamtschaticum var. floriferum "Weihenstephaner Gold" which because of it's color helps the area feel lusher.

Looking to the right side... 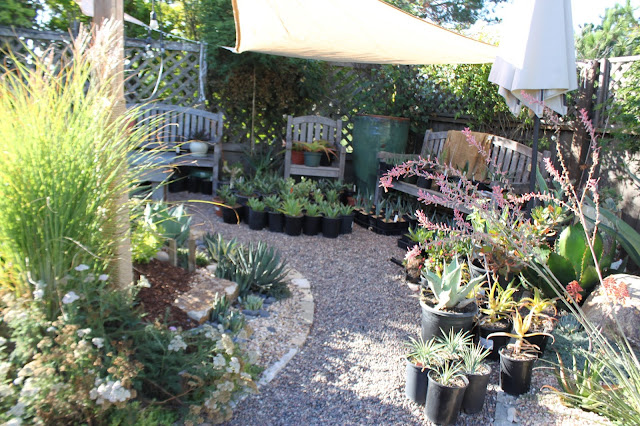 Hopefully the tall grass gives you a point of reference when I say... we are looking left around the corner to a 'hidden' seating alcove. This is also where I stash lots of extra plants - just out of sight from the house.

The gravel path shown above used to extend further along the fence. I felt the path was a waste of space in our small backyard so I demo'd the path, brought in a few yards of dirt and just planted the Leucospermum + more last week. On the other side of the low mound is more planting space reserved for my wife's gardening area.

Here's a view looking back at the hidden seating area just behind the Leucospermum. This whole area used to be aggregate patio with a rotting wooden enclosure around pool equipment - now it's a blank canvas for my wife.

The above patio rubble ended up in gabion boxes embedded in the front garden. Eventually I'll take all of this patio out and replace it was something permeable, plantable and of course nicer looking.


Back in the hidden nook there are a few new plants that have been planted since last years post.


I ordered the above Aloe rivierei from the Institute for Aloe Studies last year. It had been living in a 1 gal pot until just last week.


This makes a great place to sit after work or on a summer morning. It's worth noting that even the A. Xylonacantha pictured in the foreground is looking healthier after I put down a layer of rock mulch.

For reference here's a shot of the same area from last year...


The Agave pictured above have only just filled out enough that I've started to enjoy this part of the path. The A. ovatifolia is a looker of course but the surprise beauty has turned out to be Agave "Fatal Attraction" (pictured in the background) and it's multitude of pups.

When I first bought the above plant I thought it was an Aloe Hercules but over the last year it's leaf shape, form and growth seem uniquely different. My guess now is that a few years ago I unknowingly bought a young, unlabeled Aloidendron dichotomum.

What's that on the chair in the background? I can't quite make it out...

These A. vanbalenii started off in 2" pots and I think have outgrown their current 8" (?) pots over the last year. The fourth plant was put in the ground last year and has grown to twice the size of the ones pictured above.

This Aloe ferox is just beefy looking. Compared to last year this Aloe ferox has really started to fill out, although it still has several feet to grow.


Across the path... is another planting bed which also has a historic post - Bed One

It's been hard to get a good shot of this planting area because of the Summer sun. I also haven't planted as much ground cover in this area so from this angle the ground looks forbidding.

I discovered a single Pedilanthus at a big box garden store several months ago which at the time seemed very unusual.  I couldn't resist.

Aloe vaombe seems to enjoy the all day sun - just look at it sitting there like an elephant seal on the beach. I'm looking forward to it growing into taller tree form over the years and providing a bit of shade. Can you believe I bought this just 2 years ago in a 4" pot ?! In the far background is a plant which grows even more quickly  - Aloe Thraskii. 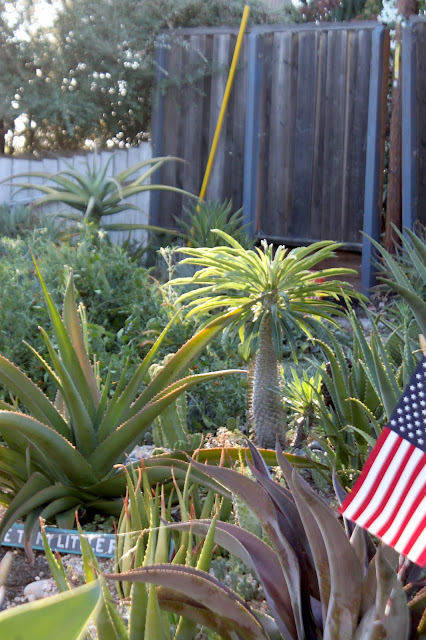 The purple plant in the foreground is the top of a 'Mission to Mars' Mangave. I planted this over the last year from what was I think an 8" or 10" pot. It now stands about 2 1/2 feet tall and 3+ feet wide. "Mission to Mars" is my favorite Mangave so far out of the roughly 1/2 dozen varieties I've tried because of it's mottled purple coloration, fast growth and general toughness.

Next door the Mangave "Mission to Mars" is an Aloe castanea "Cat's Tail Aloe" which looks a bit overwhelmed.

Now let's check the progress of plants around the backside of this planting area.

Among the asparagus is happily growing an Aloe Hercules which has probably doubled in size over the last year. It is also interesting to see just how much the jungle of surrounding plants have grown.


Here's another new addition since my original backyard post a year ago - Aloe Marlothii. I planted it in this spot mainly because it needed a home, not because of a grand, garden design. If I'm being honest that's how a lot of plants find a home around here. Hard to tell but currently about 12" tall. 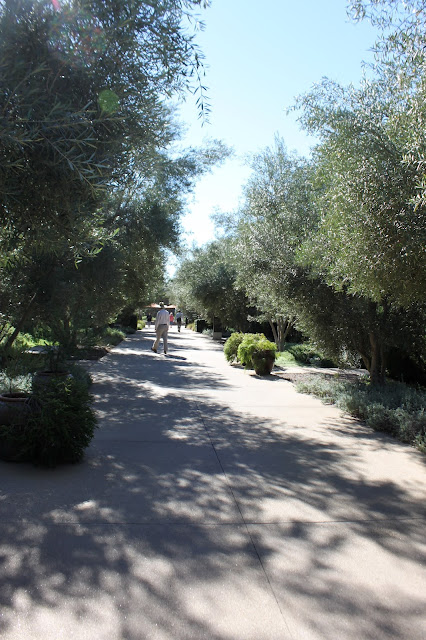