The warm weather arrived weeks ago, the kids are out of school, the summer solstice has passed, and 4th of July is just around the corner; Northern California can safely consider itself squarely in Summer. The hillside garden is still a work in progress but enough has changed that it's worth showing the difference since the garden started 7 months ago.


The serpentine curve of the rock wall divides this upper stretch of garden into three beds. If I could I'd use a sedum ground cover throughout the beds but unfortunately it is a favorite of the deer as other options dry up. The larger plants in the foreground you will probably recognize - Agave vilmoriniana. I'll end up finishing this section later - until then I've left it covered with mulch to keep the weeds down and moisture in the soil.

The Kalanchoe providing a splash of red above mark about where my property line starts; our neighbors were kind enough to let me to extend the bed a few extra feet onto their property. I used Lamb's Ear (Stachys byzantina) as a ground cover since it's both deer resistant and drought tolerant. For now it's out competing the Coral Aloes - hopefully by next year the aloes will be head and shoulders above the lambs ear. 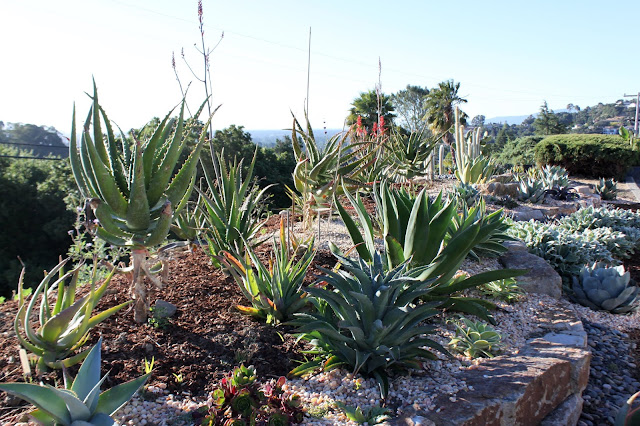 I'm hoping the 10 or so Aloe dawei and Aloe 'Eric the Red' will eventually fill in to create backdrop for plants in the mid and foreground. The A. dawei were just planted in Late April - I was happy to see they decided to flower.

There's a lot going on above ... time for some close up shots.

All of the smaller A. desmettiana come from bulbils I collected from my other plants.  I've planted several in our garden and now have extra waiting to make a new home in your garden.


In the first longshot picture above you'll notice three A. guiengola which were all offsets from a plant in my backyard. The mother plant largely melted with all the rain we had this past Winter and Spring while these offsets seemed to do well. I can only guess that's due to better draining soil and location. In the background is an Aloe chabaudii I mail ordered from the Institute for Aloe Studies. Aloe chabaudii is described as "a clustering aloe that can form large groups with neat rosettes to 2 feet tall of up to 30 bluish green leaves that are often flushed with pink when grown in full sun." Maybe I didn't give it enough room to spread?


A. chiapensis is still one of my favorites for the way it brings a lush, almost tropical feel to any garden. A. attenuata has a similar effect - so I like to pair them together. A. chiapenis and attenuata are companions in other locations around my house as well.

Almost forgotten in the mid-ground is a little A. glauca I also brought from the Institute for Aloe studies as a cutting. I'm hoping the bamboo stakes will save it from being trampled by deer.

This end of the garden is where the hardier Agave and Cacti live - although there's still plenty of other plants to look at first. Notice the small Mangave's in the foreground?

At this point the 'Ladies' are almost hidden by the unruly Lamb's ear - but give them time. 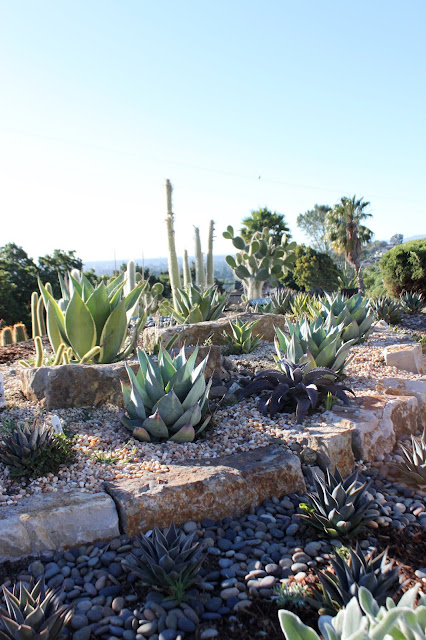 Many of the Mangave in my yard have pitting due to a few 45 second hail storms this winter... the newer leaves don't which is a great way to measure just how much the plant has grown recently.


Now to the cacti at the end of the bed which are highlighted by the sun each morning.

Looking at the same cacti with the sun behind our back they lose a bit of magic.


How many changes do you see? The striking difference for me was just how quickly the Grizzly Opuntia grow.

You might recognize the Agave filifera ssp. schidigera "Shira ito no Ohi" in the foreground from my post on the San Carlos Garden Club plant sale. They were a bit pricey for our customers that day so I ended up buying many of the left overs. It's also interesting to see how in the first week of June, when this picture was taken, the Opuntia erinacea have the beginnings of new paddles. Just three weeks later those 'nubs' have grown into almost  full size paddles!


The above A. titanota came from Annie's Summer Sale a year or two when at the time they had a great selection of young specimens in 4" pots. It has been patiently waiting since then for it's "forever home".

I found these Opuntia at our local big box store, liked their coloring and couldn't pass given their $6(!) price. They have probably doubled in size since putting them in the ground several months go.

With their riot of shape, texture and color,  cacti remind me of a backdrop from Alice in Wonderland.

Who wouldn't want the above A. filamentosa? At least that's what I thought when purchasing it for the Spring plant sale. Both specimens went home with me that day. 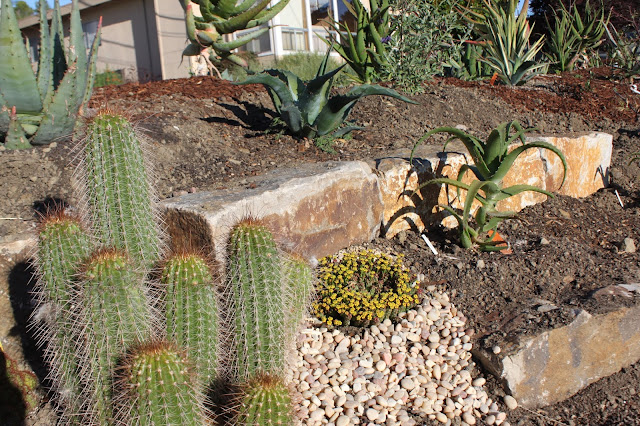 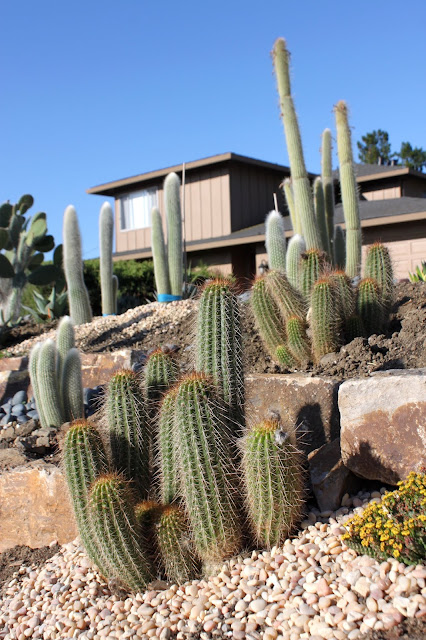 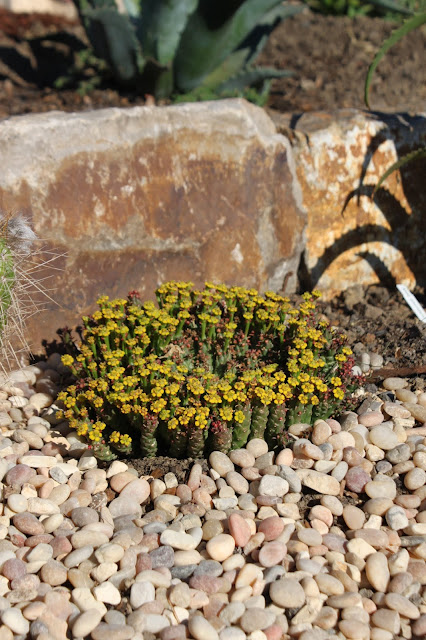 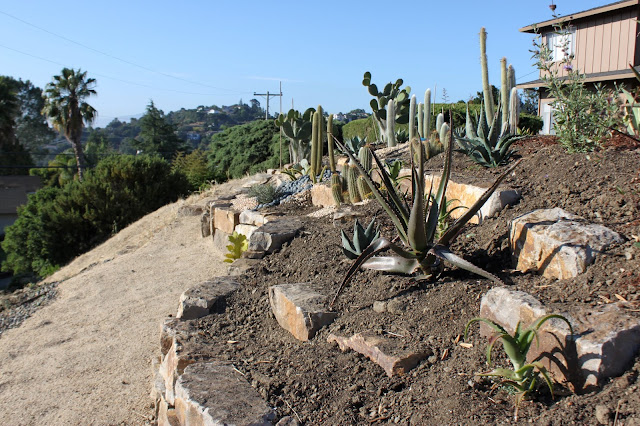 Further down the path we get to a section that still needs quite a bit of work. The larger, brown looking plant is a Aloe vaombe which has been unhappy since it emerged from a nice cushy greenhouse. There are also three smaller, much greener, Aloe pluridens you might be able to see on the hillside. These young Aloes plus more waiting to be planted are the beginning of an Aloe Tree grove.

Around Thanksgiving of 2018 my order of a dozen Aloe pluridens in 3" pots arrived. They have all grown quickly but the three planted in these pictures spent most of the wet season in a grow tent under 12 - 15 hrs of light per day. They've ended up bigger, greener and generally healthier looking than the other A. pluridens.