I recently read an excellent post about the Institute for Aloe Studies on Gerhard Bock's Succulents and More blog and was excited to check out their website and of course order some plants. John Miller of the Institute for Aloe Studies (IAS) responded to my order promptly even though he was in Ethiopia at the time looking at Aloes in habitat. I'm just across the SF Bay from Oakland so the box of Aloes arrived promptly after his return from overseas just as promised (before I'd had a chance to even send a check)

I think Gerhard did a great job giving background about the IAS so I won't repeat what's behind the link above but I did want to share photo's of the plants almost one month after potting them. Like others I don't know yet where these plants will live permanently but for the next few years I'll keep them in pots. I should have taken pictures of the plants as they arrived to show which already had roots and which were cuttings but alas I wasn't that forward thinking. I'm documenting them now and in a year plus I'll take some progress shots. 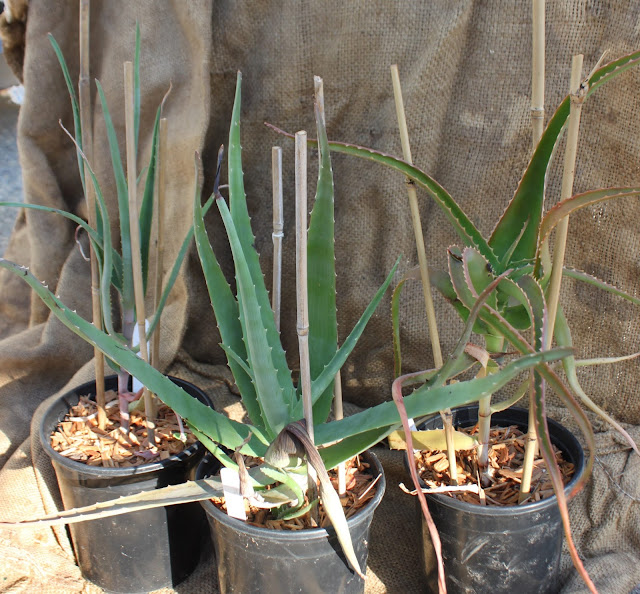 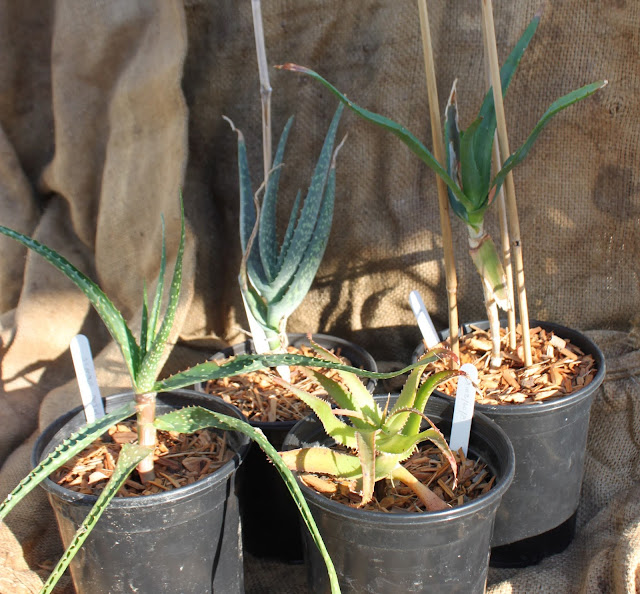 Here's a few close ups of my favorites:

If memory serves I think Aloe pluridens was one of the only cuttings.

Here's a bad photo showing a larger specimen of Aloe Thraskii that I have been growing in a 15 gal pot for roughly 6 months. I think this must have been living in a hothouse as it suffered a sun burn the first month in my backyard. You can still see the damage on some of the lower leaves. I bought this as a 5 gal plant and transported it home in my mini cooper which was an interesting experience ... I discovered quickly that the leaves are damaged easily. By damaged I mean they break in half or come off entirely! I've had another thraskii in the ground for less than a year; it has grown faster than the one shown above.

I'm looking forward to seeing these IAS plants grow and eventually make it into landscape where hopefully the pollinators will get to enjoy the flowers.

Aloe helenae seems to be a slow grower - this guy has been in the ground for more than a year.