When I wrote about how my backyard has changed over the last several years I neglected to spotlight any of the new plants. Now that I've told the story of how we got to the present day let's take a look at some of the new plant 'stars' and how they will shape the space going forward. For reference the new garden is split into three beds by a winding gravel path that connects the patio with a small lawn. A portion of the first bed is devoted to Aloes so let's talk about a few of them as well as their companion plants.

I bought the above Aloe vaombe about 15 months ago from Annie's Annuals back when they still had them in stock as 4" pots. I upgraded it's pot to a two gallon size (I think...) and was surprised at how quickly it grew over the next year before I planted it in a temporary home. Some day it will grow into a small tree Aloe and provide a bit of shade to the bed. Beautiful plant! It's a little stressed right now because of transplanting it to it's new (permanent) home. When last I visited Annie's they were out of Aloes. One of the employees mentioned the seeds they'd purchased had been mis-labeled. I imagine it will be some time before they grow another batch big enough to sell in 4" containers.

Right next door are two Aloe cryptopoda purchased some time ago as 1 gal plants from Serra Gardens in Fallbrook CA. I see they are out of stock now; luckily I bought three and they have been producing offsets. These will grow to a shrub size and hopefully provide lots of blooms for the hummingbirds. They have yet to bloom since buying them but that's possibly because they were not happy enough in their 5 gallon homes.

Moving toward the backside of this planting bed is another purchase from Annie's named Aloe mutabilis which is sadly now also out of stock. Plants that will grow larger like this one I've generally placed well back from the edge of the bed.

Moving further along the bed is an Aloe kedongensis which I bought on a whim during a visit to the UC Botanical gardens (Berkeley, CA) I think I remember this plant being described as similar to Aloe arborescens which admittedly makes me nervous as I have several already and have seen them grow rapidly to engulf neighbors. I may end up doing some work keeping this Aloe under control in the coming years. The general idea on this side of the bed is to create a mass of different Aloes with lots of blooms for the pollinators.

In the middle of bed #1 is what will eventually grow into the largest of it's specimens - Aloe Hercules. At least I think that's what it is - this plant looks suspiciously different from the other Hercules in the yard. At any rate that's what it was labeled as at Rojas Nursery in Fallbrook. Maybe someone out there knows better.

While walking around Rojas Nursery with Rosalina the owner I spotted a large, handsome, Aloe vanbalenii in what was probably a 15 gallon bucket. It was the first time I'd ever seen this plant and was blown away - unfortunately it was much too big for the car ride back to the SF Bay. Luckily Rosalina had a table of 2" pots with several small specimens tucked away in one of her working greenhouses. I ended up buying four and actually would have bought them all but felt she probably wanted to keep some for growing to a larger size. The little guy above is the first I've put in the ground. I have high hopes.

Truthfully I'm not sure the Pachypodium Lamerei (Madagascan Palm) is going to survive a February outdoors here on the SF Mid-Penninsula even though we are in zone 10a. I bought this plant over a year ago from Waterwise Botanicals and it has lived in it's original 5 gal pot outdoors since then. When I know the temperature will drop into the lower 30's I move it indoors for the night. There comes a time when you just have to stick it in the ground and see what happens. I love the unusual form (so different from it's companion plants in the bed) and of course how the setting sun lights up it's thorny armor each evening. I'm hoping it will survive and grow to over 10'.

A few years ago I noticed my local Home Depot had a pallet of 1 gal barrel cactus for $6.98 each; I bought six, repotted them in 5 gal buckets and left them alone. In hindsight that was an awesome deal given that barrel cactus the size pictured above will sell for $30 plus at an average nursery. I now have all six planted on either side of a path with a roughly western exposure where they will get 12 hours of sun a day this time of year. In the Winter of course they will get less but still at least 6 hours - assuming the sun is shining.

The Agave wercklei above is another specimen from Serra Gardens in Fallbrook, CA (San Diego County) It's looking a bit rough at the moment because it's been moved a few times. It's serving as a transitional plant from the dryer cactus area to the group of Aloe's. The green, generally rounded leaves are a nice change from many of my Agave which tend toward grayish blues.

As you may have noticed in the background there are many more plants which I have not mentioned. I'll have to save those for another day but will leave you with this parting shot of a few, uprooted plants looking for a home. 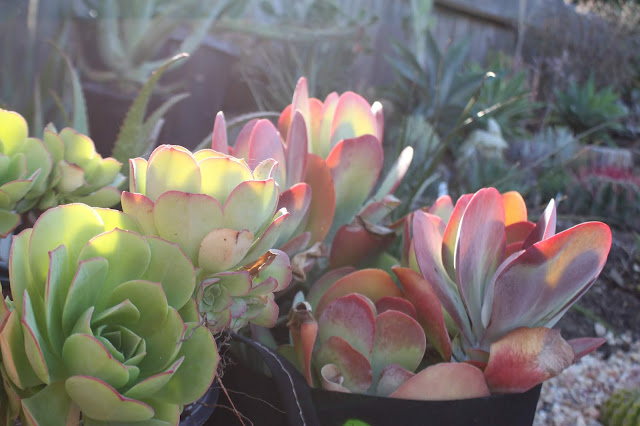