Maybe we all have certain plants that seem special for some reason. They evoke a feeling like that hard to find collectable baseball card, or comic book, or vase or whatever else you're into. To the average person it's just another card, comic, vase, plant etc - but to you it's special. Although it's not that hard to find, Aloe vanbalenii isn't a plant I've seen for sale up here in N. California very often. Plus - with it's curved octopus like arms and low profile it's just cool looking.

A. vanbalenii could make an impressive specimen plant in any garden - especially if surrounded by plants of a contrasting color and form like the grayish Cotyledon above. To me this specimen looks like an octopus crawling across the sea floor.

Here's one of the earliest shots of my A. Vanbalenii which was originally purchased in a 2" (or maybe 3") pot back in 2017.

Below are three sibling plants that to this day have not made it into the ground. At the stage pictured below they are in 8" (or maybe 10"?) pots. 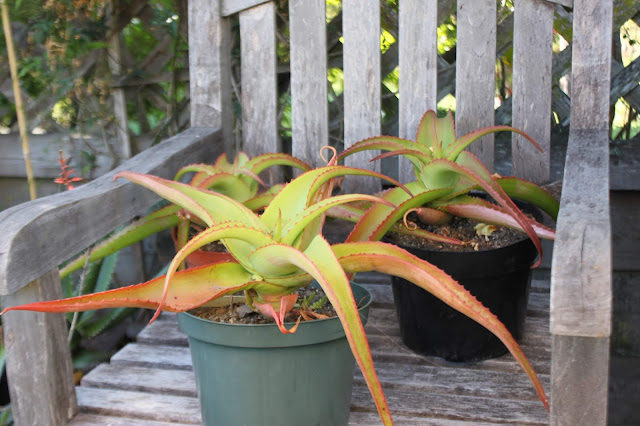 Below is a shot showing just how much one of these aloes will grow when planted in the ground vs left in a pot. This South African plant grows natively on rocky outcrops or in shallow soils but doesn't seem to mind the richer, amended soil in my backyard. 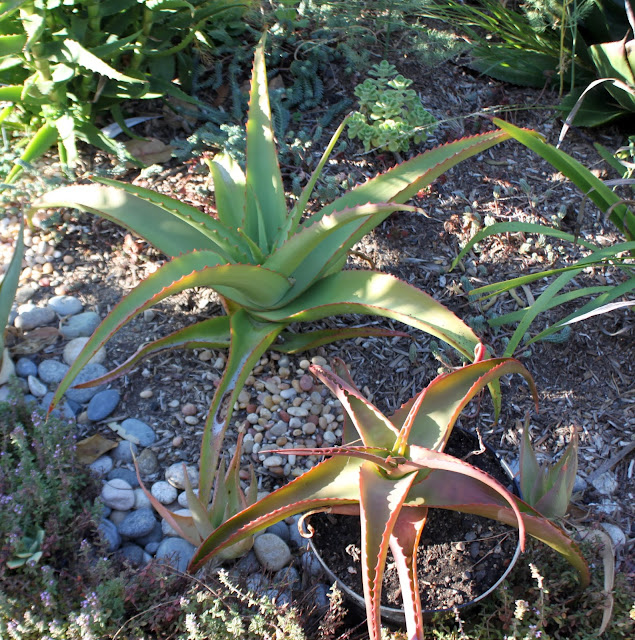 When "up-potting" the A. vanbalenii I was surprised at how aggressively the roots had grown after about a year. These look like they were getting root-bound.

After 6 plus months of living in 5ga pots the aloe take on more of a candy apple green coloring. The extra soil and more frequent watering encouraged them to grow quickly. It wasn't long after taking this shot that I found roots the diameter of drinking straws growing out the bottom of the pots into the ground.

All four of these plants have been growing outdoors for 3+ yrs now and and have never seemed to mind our local temps that have ranged from roughly 32f - 106f. This plant will do best in USDA Zone 9 and above if planting in the ground but of course a micro-climate in your yard might afford more leeway.

When stressed from lack of water, or when in lots of direct sunlight, they get the classic orange to red coloring. Unlike Aloe cameronii, full summer sun doesn't seem to turn these plants as red - especially if they are in a big enough pot and get semi-regular water. Given how aggressive their roots seem to be A. vanbalenii does not make a good candidate for your favorite ceramic pot. 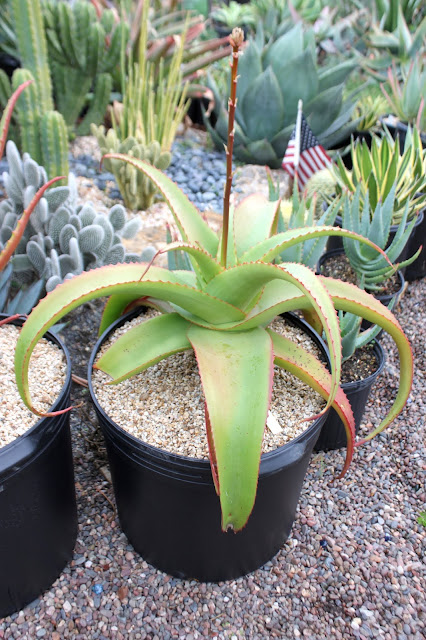 Interestingly enough all four of my plants have begun to bloom for the first time ever this winter. Three of them are now in 10ga pots and seem happier than ever but I did not expect them to bloom! I estimate these plants are between 4 to 5 yrs old so possibly they hit puberty? There is one difference; the plant in the ground has two bloom stalks while those in the pots have a single bloom stalk.

The plant above has been in the ground for two years and has a decidedly different form than it's potted siblings. The spot it's growing in enjoys more shade these days because of some adjacent Aloes. Given the chance I'd probably move this Aloe to a sunnier spot to bring out it's read and orange hues.

It's nice to have a yellow flowering Aloe since most other Aloes seem to have red or orange flowers.

It's mid-March now and the above blooms are still around - although definitely starting to fade.

My advice (for what it's worth) - if you see an A. vanbalenii for sale just buy it.

Labels: Aloe vanbalenii then and now