This is the second installment of my adventures while building a dry creek. If you have not already - take a gander at the first installment.

There's only so much we can do to alter a site. In a way this is actually a good thing because if the site has unique constraints then chances are you'll end up with a unique garden! So I say - embrace adversity and make the most of the opportunities it provides.

The two pallets above weigh somewhere north of four tons. Like opening  a pack of baseball cards (or Pokemon cards if you're into card games) - you never know what you'll get. Luckily there were some unique pieces.

Possibly the worst shot ever... but it gives a sense of the 'before'. I expanded the rough grade of the creek so that the "rise to run" ratio of the stone work would be less extreme and allow for more planting.

The grade is still quite steep so I've placed several rocks in vertical positions in an attempt to buy some planting space. The rock wall next to the gabion basket will continue along the path. Unfortunately I didn't order enough rock to finish it and the dry creek!

By this point the majority of the creek's rock work has been completed... and boy does it look rocky. I was beginning to think "Oh no, what have I done..." It's not what I had originally envisioned.

Some of the larger, odd shaped rocks I used around the bases of the gabion baskets.

There was not as much room for planting as I'd originally thought. I keep telling myself that over time these young plants will grow larger and soften the rocky landscape.

Colors and shadow change throughout the day on this South East facing slope. The long, deep shadows cast in the morning give way later in the day.

On those days when we get Winter / Spring storms any excess water will be channeled down through the above area (honestly that will rarely happen but when it does I'll be there to watch!) Update: within hours of writing these words we had fierce midnight storm front blow through and dump a bunch of rain :)

There is not much soil at this level in the hillside. It took me a few hours with a digging bar to break apart the rock between the gabions in order to achieve this slight cut. Some of what I took out can be seen piled up along the edges of the creek.

One of the unexpected benefits of a hillside garden is the constantly changing site line. Imagine walking down the above path and seeing the changing garden perspective. 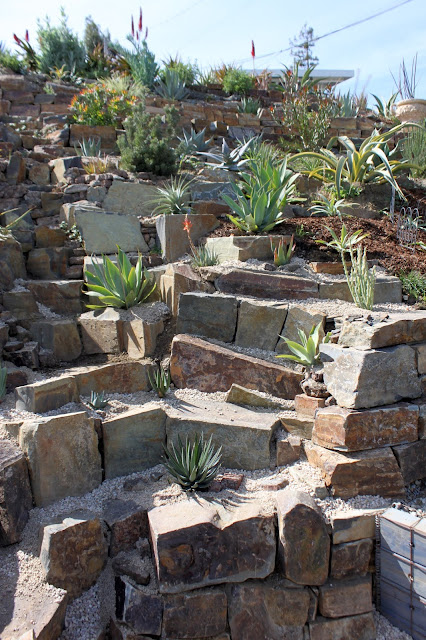 Of course as the garden designer it means a little extra work thinking about how your space looks from more angles - it's not just about the x and y axes it's also about the z axis. 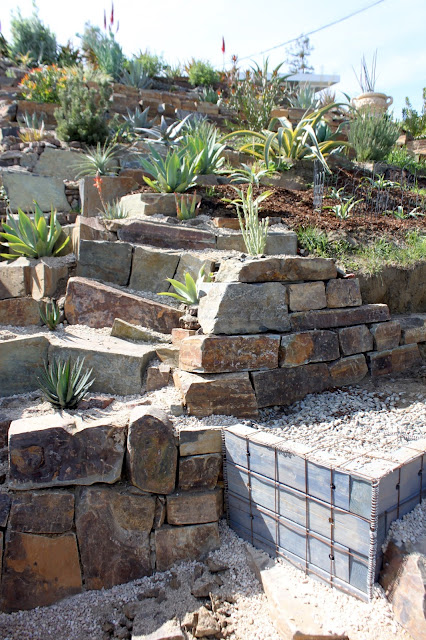 Is it just me or does the above feel like we are addressing a Galactic Senate of plant life?

I didn't add many. The plants I chose were almost exclusively what I had on hand and were ones I knew could survive for long periods without irrigation. I will definitely hand water them through the first dry season to set them up for success - after that they are on their own. 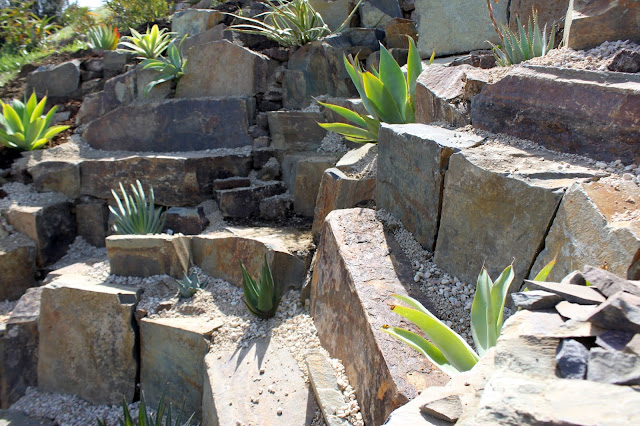 As much as possible I spent the extra time lining up the edges of rocks to flow in similar directions. The more this can happen the more the individual boulders will naturally appear part of a contiguous whole. Whether viewers intellectually recognize this trick or not - hopefully it just feels right.

To be honest I don't remember much from my school days but for some reason the story of how Landscape Architect Lawrence Halprin drew inspiration from nature while designing spaces like Lovejoy Fountains in Portland has stuck with me all these years. I pulled out one of my old textbooks and found a quote of his:

"I believe not only does form equal process in nature, but I also think we derive a sense of aesthetic from nature... I view the earth and it's life processes as a model for the creative processes."

One of the iconic professors we had at the time, Roger Osbaldeston, worked for Halprin. I'm guessing this is why a seed of the above story has stayed with me.

I picked up a bunch of Agave pedunculifera seedlings from Rancho Tissue Culture awhile back.

I couldn't resist mixing the subdued colors of this Agave with patterns in the massive background rock. This is one of the boulders I really should have gotten help lifting. My neighbor helped with several of the other large boulders.

Half Moon Bay Nursery had this miniature agave in stock a few weeks ago. My wife thought I should buy it... that's all the prompting I needed. Turns out it was a perfect fit for one of the tiny planting pockets.

The same type of Senecio in our backyard has reached almost four feet and generally has kept a nice upright form.

And finally ... for scale - here's a picture of yours truly sitting in the canyon. 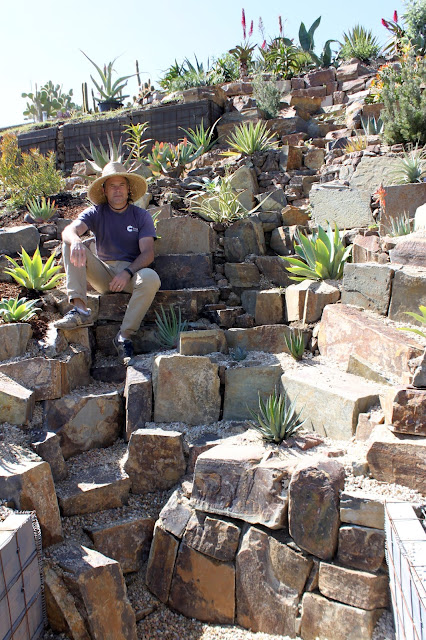 Stay tuned for part three over the coming months.