It's actually been a year and a few months since we broke ground on a garden that was to take the place of 40+ feet of tangled junipers. I've slowly been inching my way down the hillside, carving out more planting space.

Let's flash back to November of 2018 for a quick recap. When the junipers were first being removed there were several late nights after work stuffing my neighbors compost bins with clippings the day before trash pickup.

By the end of December the junipers were gone, the soil was amended and a ribbon of rock had been laid down. From the beginning this was meant to be a garden without an irrigation system.

Back to early January, 2019 when plants were first going in the ground.


Many of these plants are commonly available at big box garden centers around here: Aloe striata, Aloe "Blue Elf", Agave vilmoriniana, Aloe barbadensis etc. Because of their availability and generally low price - they make a great choice for mass planting. In the foreground you might notice some newly planted Coral Aloes ... I couldn't resist the bargain price!

These larger Coral Aloes originally came in 2" pots via mail order a few years ago.


Last year I dug these Aloe 'Blue Elf" out of the ground, separated them, and moved them to the front yard. Over much of the last 12+ months they looked stressed but have now recovered and are producing more offsets. I also inherited several Aloe barbadensis (in the background above) over the last year. I decided to use them as a background plant rather than the alternative - languishing in pots in my backyard.


The ladies regularly meet here. What they are talking about I'm not certain but possibly how to get rid of the ugly Lamb's ear blocking their view.

As the summer of 2019 progressed the ground grew harder and the soil moisture grew scarcer. Not much happened. On this part of the slope I focused on colonizing with a few of the toughest, foundation plants at my disposal - namely Agave franzosinii.


This was a point in time where "vision" was what kept me interested in the project because a rock hard hillside of dead grass was less than inspiring.


By November many of the plants had filled out nicely although progress on this section of the path itself had been at a standstill for many months. I procrastinated too long in buying another palette(s) of rock. Now my local landscape yard is completely out... so just have to wait.

The bloom spikes in the background of this shot are Aloe dawei.


January 2020
The bloom spikes in the background are from Aloe 'Erik the Red' - a much darker red than their A. dawei companions which bloomed just a few months prior.

This is a favorite spot of mine to sit so it seemed using softer planting along the edge would be best. As an added benefit the roots of these native grasses will reach deep into the ground and contribute to the overall soil health. The bigger, shaggier looking grass in the upper left is a Red Fescue (Festuca rubra) Curious to see how this does during the dry season.


The Aloe pluridens above and others will eventually form an Aloe tree forest (at least that's what I keep telling myself!)


Let's walk down the path a few yards.


This rock is new over the last few months. They serve as "rip-rap" to prevent erosion and provide lots of planting pockets. The actual rock wall bordering the foot path will be built at the bottom right of this photo. First I need to remove a few cubic yards of dirt.

I'm counting on the Agave franzosinni growing dramatically tall and shielding views of the driveway for future path goers. By the way - do you like my rock work in this shot?


You won't see this in the wide shot above - it was planted a bit later. This was another Institute for Aloe Studies purchase from a few years ago. It's form has changed dramatically - see the original post about when this Aloe mudenensis was mail ordered.

One of some more recently planted Aloe pluridens - tho they all came from the same mail order a few years ago.

Here it is the first day of February, the sun is out, the birds are chirping and I've made a stop at one of my favorite local nurseries.


The gabion baskets I made last year are very practical but sadly when compared to the dry stack wall in the background they are not up to the same aesthetic standard. As a result we decided to obscure views of the baskets with a bit of shrubbery. Over time the Leucadendron and Leucospermum will hopefully reach 5' or more in height - or roughly at the level of the upper path. 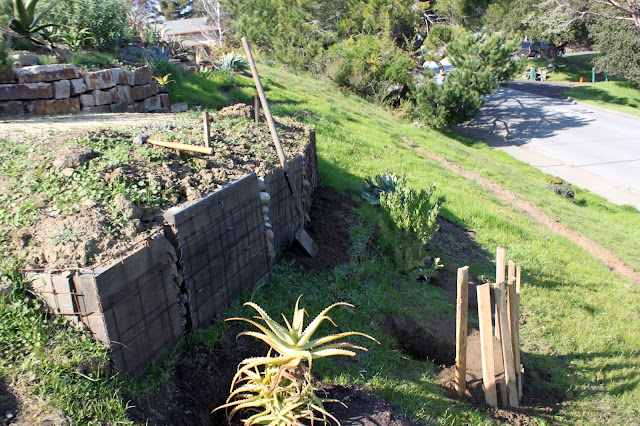 This hillside is steeper than it looks. Dirt, rocks, tools and people have been known to roll to the bottom. To avoid bombarding pedestrians I use temporarily placed stakes to help create a planting berm.

What seems a rather massive wall up close ends up looking much smaller when viewed from the sidewalk.

So far this path connects to nothing and goes nowhere... still it's exciting to see future parts of the garden delineated. From the afternoon shadows you can tell this is an eastern facing slope.


A few weeks later this shot shows something new developing at the bottom of the path.

I couldn't help myself over the long President's Day weekend; I started a project. A new garden wall! I'm using a different rock from above - it looks similar but is MUCH heavier. You might be able to see from this profile shot that the wall is "battered" for strength (and aesthetics). 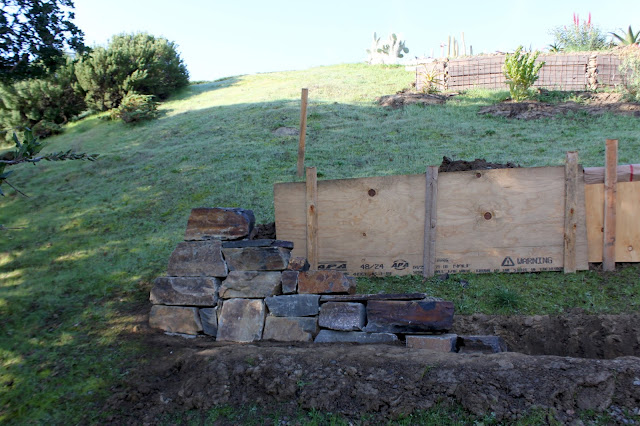 Once I order more rock this will become another terraced spot on the hillside. It's not visible from this shot but the wall is "L" shaped - a leg is extending up and into the hillside. The hillside itself drops to the left so this corner of the wall will be it's highest point as I try my best to keep a level top.

Before the ground turned hard and digging would take 10x effort I thought it smart to spend a day shifting soil - literal "land-scaping".


Once I can buy more of the rock used in the picture below - I'll continue the seating/retaining wall in roughly the curvilinear outline you can see in these shots. This is a good place to stop. From here I'll order more rock and perhaps add a few foundation plants. Down the line I'll fill in the details with smaller plants. I don't have a "plan" for now other than to create the bones of a good space.

Years ago in school we planned, we discussed, we drew - axonometric views, perspectives, plan views, profile views, bubble diagrams, drainage maps, irrigation plans ... all with the best lettering and all with deadlines. Gardening as a hobby is much more relaxing and fun! I don't draw much of anything when planning my garden; I ponder during a commute, I browse for inspiration, grab a shovel and go.

Is it best to save what you truly enjoy for a past time so it remains untainted by deadlines or concerns over income? I'm leaning in the direction of a 'yes'. I'm sure there's lots of examples out there of people who've made it work but I'm not sure I would have been one of those exceptions.
Labels: agave franzosinni Agave vilmoriniana Aloe 'Blue Elf' Aloe mudenensis Aloe pluridens Aloe striata Festuca rubra garden wall hillside garden mangave 'Lavendar Lady' Mangave 'Mayan Queen' retaining wall