If you build it the deer will come...

... although sometimes they show up and still try to eat everything regardless of what you've built.

The deer around here know what they like and even if they aren't sure they are not afraid to give it a nibble. There is a family group of 6 or 7 that regularly make the rounds in our neighborhood. They know the shortcuts, the good places to bed down, the houses without dogs, and they know when you leave your back gate open.

I'm not particularly excited by the deer. I don't think they are cute, fascinating or very interesting. As a gardener the deer are more like having clay soil, an eastern exposure or an average annual rainfall. They are something that must be taken into account when choosing plants. 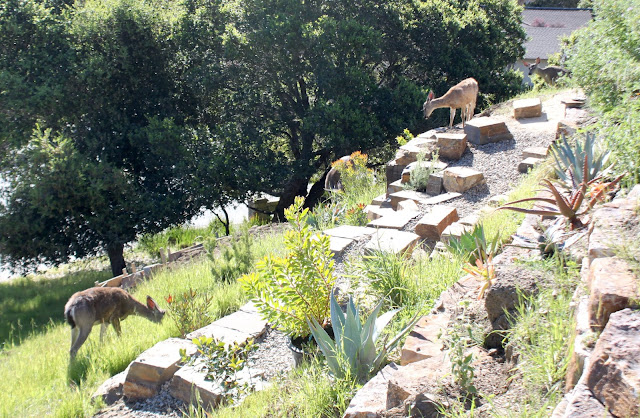 They aren't particularly concerned about me but if my 28 lb Labradoodle comes outside they instantly take notice.

Just across the street is a small, open space park with native plants like Toyon and Coffee Berry. Part of my original plan for the hillside garden was to intersperse some of those same natives with exotics from other Mediterranean climates like South Africa. Unfortunately CA natives are also the favored snacks of our local deer.  The little Toyon above was one I bought last year, never planted and put out on the path a few days ago as a test. I've since moved it back to safety.

Over the last couple weeks we've also had a gopher visiting our front yard. Last year it was moles. The moles eat earthworms (which I won't begrudge them) but the gophers will eat the agave which I cannot allow. We called someone out to trap them.

As far as the deer are concerned I've found that anything fragrant or spiny they will leave alone. Unfortunately the softer succulents like Sedum, Aeonium or Echeveria don't survive long. I suppose that's ok - it's just part of the constraints this space has been dealt.
Labels: deer Heteromeles arbutifolia hillside garden toyon