Late Summer afternoons are some of the best times to capture those magical shots. Here in Northern CA there's a time in December and January where the sky is clear, the air is still and the sun is just strong enough that if you can find the right spot it's still t-shirt weather for maybe an hour or so. Because the sun is so low in the sky the light feels unique. Within a few months we'll get maddening, daily winds that blow through the Summer months so I'm enjoying this season.

My wife mentioned the other day that she likes single stem Aloes - and not the multi-branching aloes (like A. cameronii above). The latter are too messy and chaotic.

This is only the second year that the Aloe castanea above has bloomed so I'm happy to see this year it's putting up four stalks. 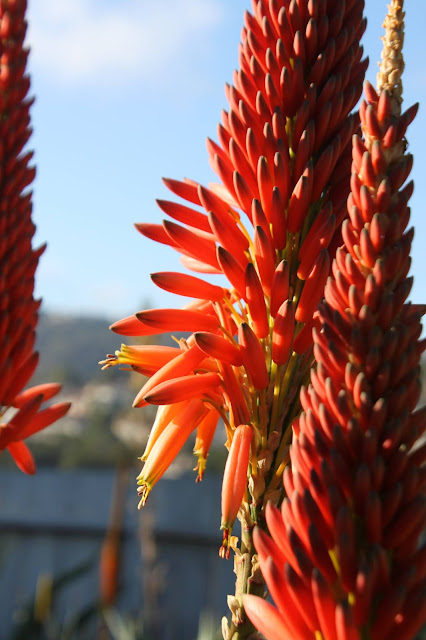 The backyard is feeling more and more like a jungle (but made of plants that would never actually live together.) This is going to sound odd but during those later summer days, after work, I'll hide a blue-tooth speaker in the garden, play some ambient jungle noise, crack open a beer and watch the sun set.  Instant micro-vacation. :)