In the last post I showed some of the progress and details of propagating from seed. Here's an easier ( and probably familiar ) technique - propagation from cuttings.

Below are some cuttings I took roughly three months ago and placed in a corner with filtered light in the backyard. I pulled them out today to check on root growth and re-pot if needed.

I took cuttings from four types of multi-stemmed  aloes: A. kedongensis, A. africana, A. dawei and A. mutabilis. My approach was set the cuttings in a small amount of soil and leave them alone. After roughly several weeks I gave them the occasional spray of water.

I didn't know what to expect but once I removed the first plant I was pleasantly surprised at the amount of root growth on this Aloe africana (I think that's what this plant is... to this day I'm still not sure!). 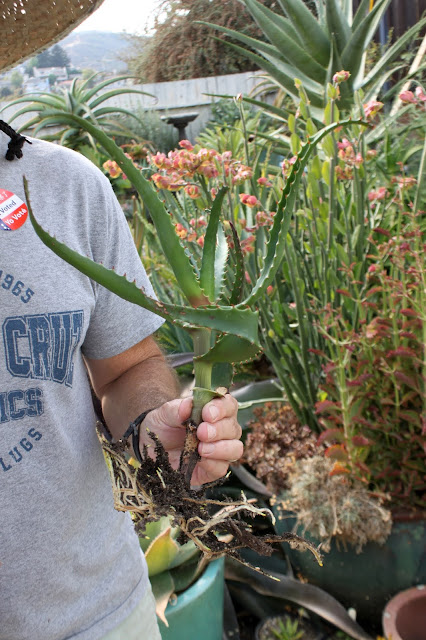 One sign it might be time to transplant your cuttings ... roots growing from the bottom of the container! 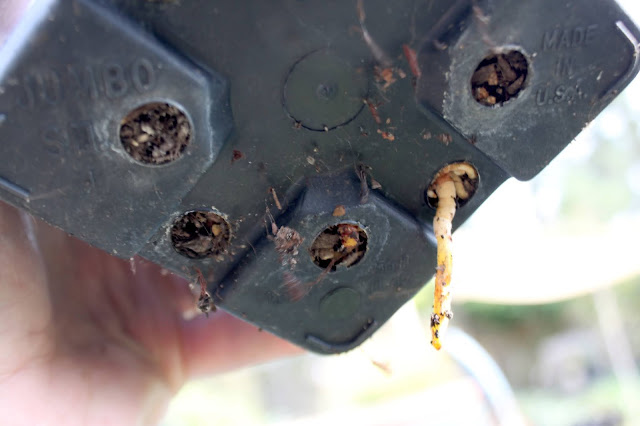 Here's an Aloe kedongensis removed from it's container. Notice it has a few sun burn marks and the root system is not as developed. In fact this cutting with it's narrow leaves doesn't resemble the parent plant much anymore. I think it's had a hard time. But these are tough plants; I've left cuttings laying around for the better part of a year and was still able to grow them on into healthy plants! 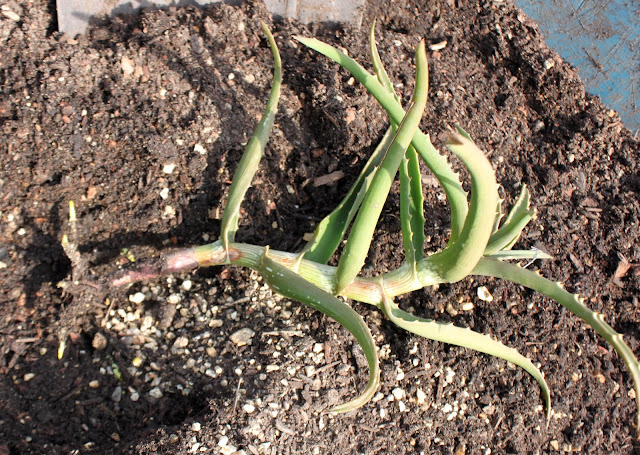 One of the variables I wasn't sure about... does it matter how big the cuttings are? The Aloe mutabilis cutting below was relatively small but still seems to have grown a vigorous root system. 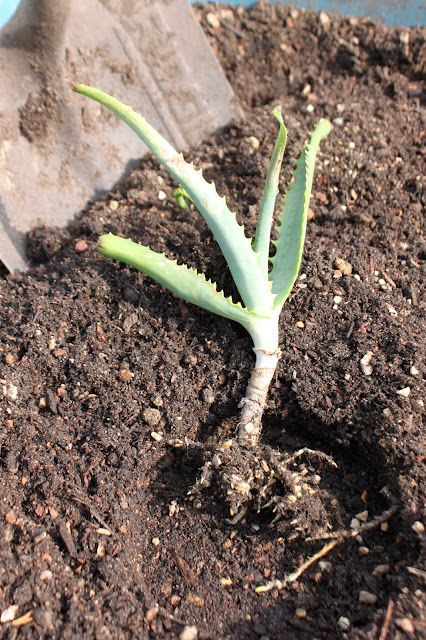 It's interesting to see a closeup of the developing root system. As with all the cuttings the roots have grown exclusively from the first node above the original cut. 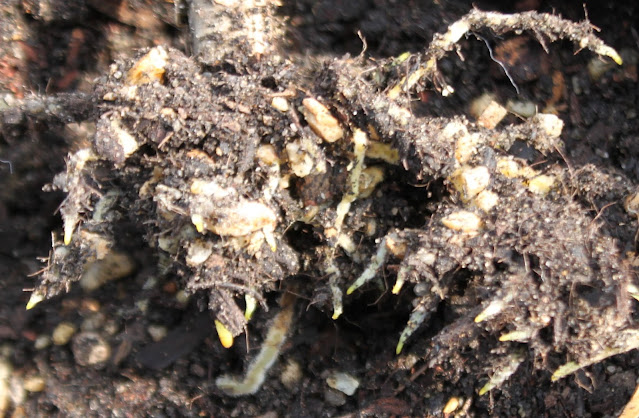 As far as I can remember all Aloes seem to have an almost iridescent greenish / yellow root cap. Kinda cool looking. I assume this plant is happy since it appears there are lots of root hairs that have grown and are holding the soil together.

Now onto the Aloe dawei which were the largest of the cuttings I took originally. 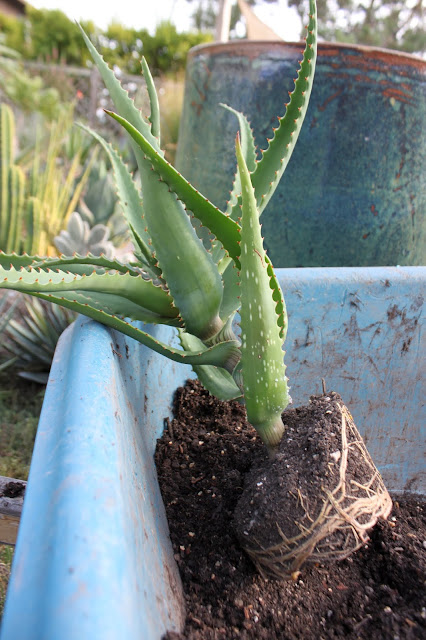 Looks different right?! The roots seem much more developed. Whether this is because the cutting was larger, it was placed in a larger container or a shadier corner, because of the species itself or some other variable I'm not sure. 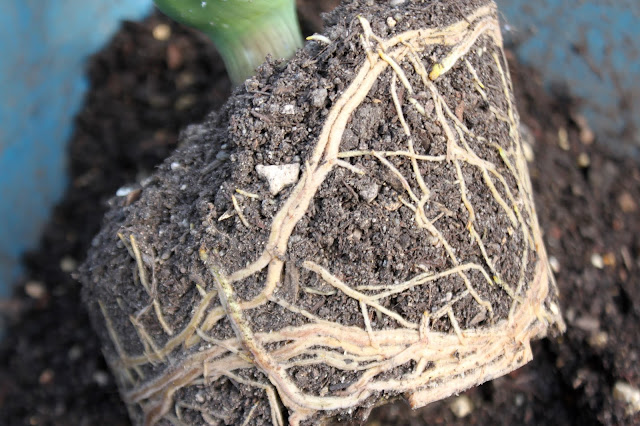 Do the plants need soil at all to develop roots? No - not really. Here's another Aloe dawei cutting grown in gravel. 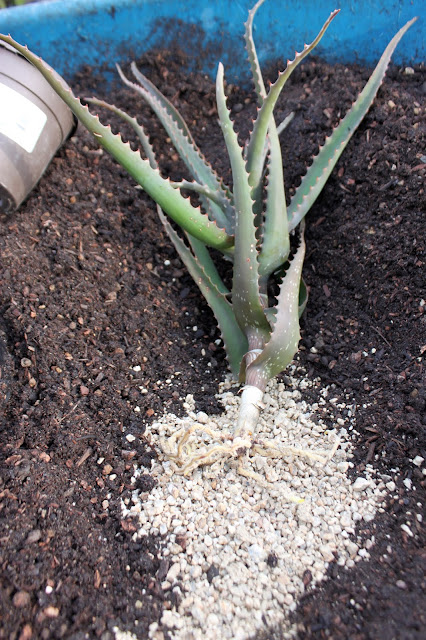 There is a noticeable difference in the root development and overall appearance of the cutting. Compare how green and plump the cutting grown in soil looks compared to this one. 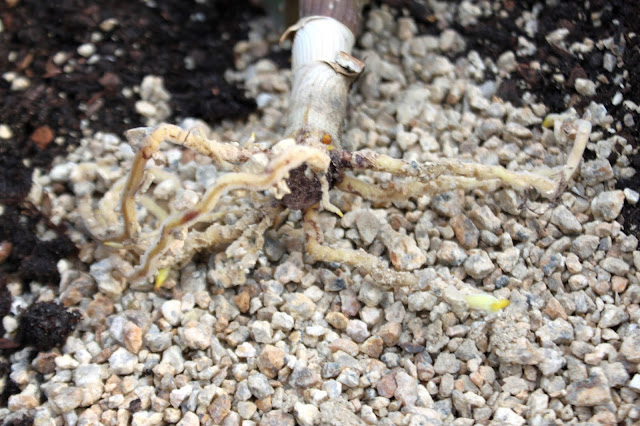 What happens when a cutting is left without any medium what so ever? Aloe kedongensis drew the short straw when it came to this test. 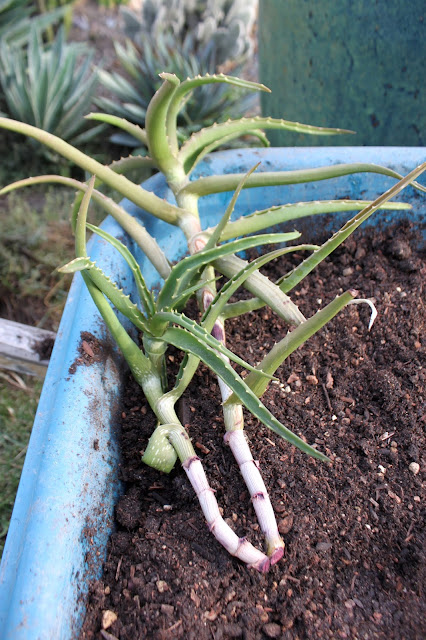 I know from experience that eventually (6 - 12 months) some highly calloused looking root nubs will begin to grow as long as the cuttings don't become completely desiccated.

I replanted all the cuttings into larger containers with more soil and plan on using them in the landscape sometime this upcoming Spring.

1. Use sharp pruners (secateurs) so as to avoid crushing the stem.

3. Cut below a stem node - this is where the roots will eventually grow.

4. Strip / pinch off a third to a half of the leaves starting from the bottom of the stem. Be careful not to strip skin of the stem as this will introduce another attack vector for pathogens.

4. Let the cut dry for a few days or a week before placing in a growing medium. (I sometimes ignore this tip)

5. Place Aloe cuttings out of the direct sunlight (especially during the long summer days). Filtered light seemed to work well for the cuttings in this post.

6. There's no need to water the cuttings initially - they have no roots. Use a well draining medium like potting soil or sand mixed with a bit of organic material to avoid rot when you do start watering.

For reference below are a few of the parent plants.

Above is Aloe kedongensis which seems to bloom whenever it feels so inclined - sometimes a single bloom and sometimes multiple flower stalks. Below is Aloe mutabilis.

As a gardener I like propagating from cuttings because a larger plant will be available sooner for use in the landscape. Chances are I'll need just a few of these landscape Aloes so taking a few cuttings is a handy technique. But... growing from seed is great to create a lot of a given plant and share with friends.