The dry creek progress has continued sporadically since the Spring. I have not done much with the creek itself but I have worked on the approaches to the creek and as you can see below a way to cross the creek that doesn't involve jumping! 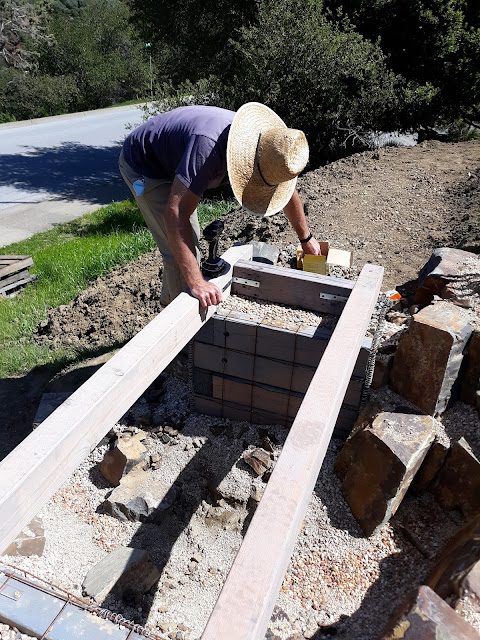 I spent an evening trying to learn something about the load bearing capacity of various sized beams and bumped into a lot of explanations that were of the "It depends" sort. In the end I decided 4"x6" beams would be more than enough for such a short span and a bridge surface that would rarely need to hold more than 2 -3 people. 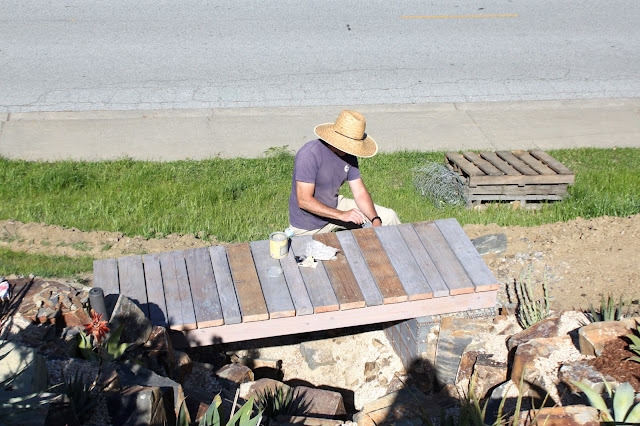 The wooden treads are left over from a deck we removed in the backyard. The stain I'm applying looked blue on the treads to start but has since lost that hue. 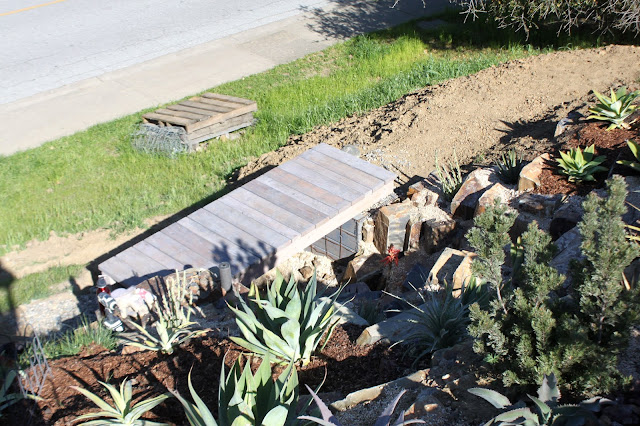 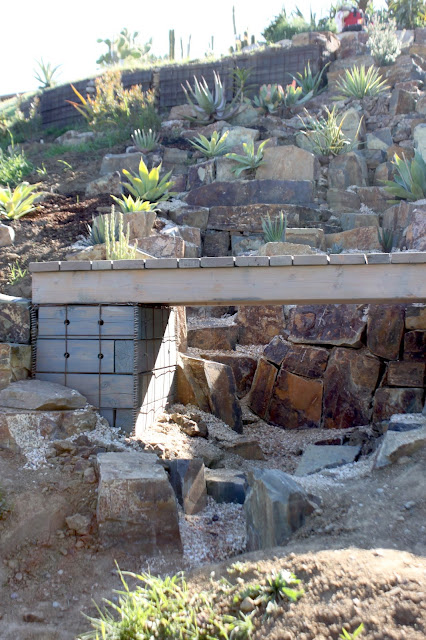 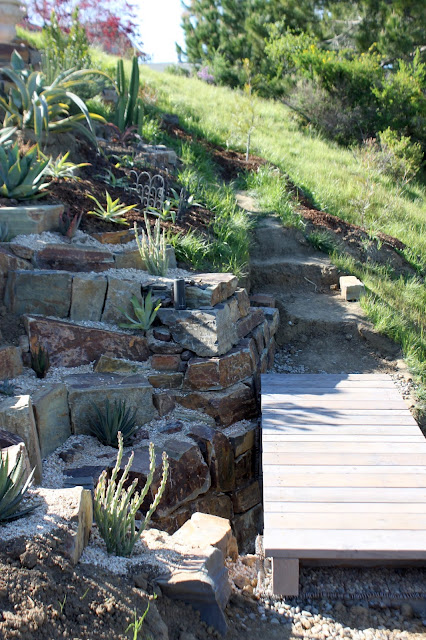 The Corten steel will turn a rusty color similar to the surrounding rocks. I was a little apprehensive about introducing another material to the landscape but decided that it's eventual color change will help the steel blend nicely with the rock and wood. 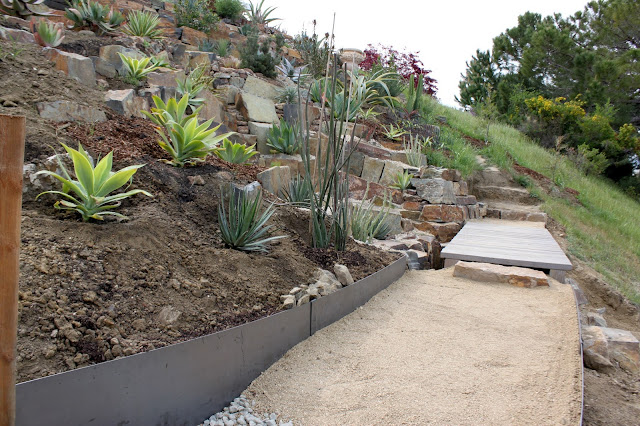 With the edging in place there was new room for a few more plants. 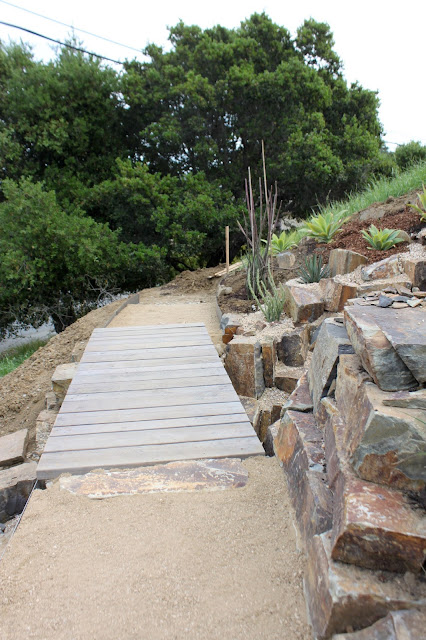 Sometimes life happens and gets in the way - but by mid-summer I was ready to restart this project.

It always feels good to create new planting space. I keep relearning the lesson - create the space first, then buy the plants. Each of these pieces of Corten steel edging is 4 ft long - so yes that is 4 ft of new planting space complete with amended soil!

A few months ago I removed several yds of the hill - in fact I had to rent a jack hammer because the dirt at a certain point transitions to rock. The plan is to eventually create a garden forecourt but for now it makes a convenient spot to park and sort boulders.

Unfortunately there weren't any really large rocks in these pallets but there are some generously sized, nicely shaped pieces.

Meanwhile, despite the summer heat, the established plants keep on growing.

Another Sunday evening shot after a weekends work. These stairs will connect the upper and lower garden paths. In the background are two Grevillea "Moonlight" which will eventually screen offsite views and were a recommendation by Hoover Boo @ Piece of Eden - thanks!

Pictured below on the opposite side of the bridge is the newest section of the garden. As you can see this is still mid-construction.

The smaller, crushed rock above is left over from my day with a jack hammer. I sprinkled it on by the shovel full hoping they would help give the larger stones a look of permanence.

The stones above act as rough steps but their arrangement is most definitely not ADA compliant. They are supposed to resemble a rough hewn trail. 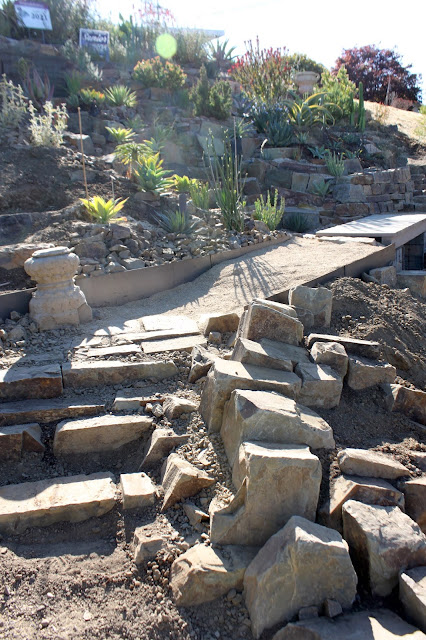 Kenton Seth gave an online talk on Crevice Gardens via the HPSO recently which I found inspiring. I decided to try my own version with plants that will survive in our CA climate (and not appeal to the deer or ants..) One of the points Kenton made was about how the roots of many plants find shelter in the relatively cool and moist soil between rocks. This seems to have played out with the plants visible in the background which are not on an irrigation system.

At this point I've run out of rock once again - so further progress will need to wait :(

It can be hot, dusty and generally miserable out here in the summer when "terraforming" but it's a necessary step before plants can go into the ground. Eventually there will be green in this landscape and I only have to look a few yards away for reassurance.

I couldn't resist planting this silver tree. I bought it a few months ago without a real plan. California's Mediterranean climate in one of the few places outside of it's native South Africa that this gem has a chance at surviving. It's a picky plant so I've got my fingers crossed that this specimen will be with us for awhile.

Until next time - Happy Gardening!